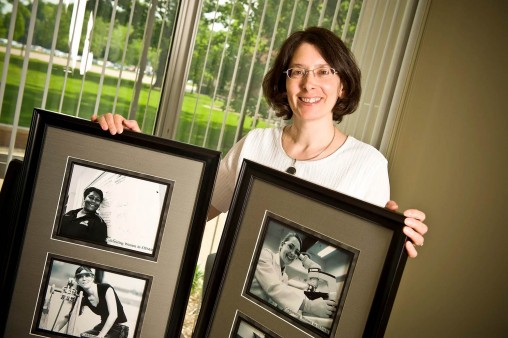 It was more than just a $5,000 grant to a Wright State University biology professor, enabling her to further her own research and that of her students by purchasing a high-tech system to better record animal heart and breathing rates, body temperatures and brain activity.

The grant to Lynn Hartzler, Ph.D., from the Women in Science Giving Circle also represented an organized effort to enhance the educational and professional success of female students and faculty members in science, technology, engineering, mathematics and medical disciplines at Wright State.

“The generosity of donors to this giving circle has not only benefited my career, but has also provided opportunities for students that I would not otherwise have been able to give them,” Hartzler said.

Started in 2009 by the then dean and assistant dean of the College of Science and Mathematics, the giving circle consists of individuals and other sources who through their contributions become participating members of the circle.

Every year the circle awards faculty grants of $5,000 and student scholarships of $1,500. Since its founding, it has awarded a total of $74,000—10 faculty awards and 16 student scholarships. Awards are distributed to those who do research in everything from neuroscience to cell biology to psychology.

“It’s one of the easiest things to sell because you come to a woman who has had her own experiences in her career—for good or for bad—and we say we want to help other women to succeed,” said Kathrin Engisch, Ph.D., associate dean for undergraduate education and outreach.

Engisch said micro-barriers such as the pressure to raise and care for families often fall more heavily on females. She said that can make it more difficult for them to complete the necessary scientific research to get tenure and results in a higher dropout rate.

“Awards from the giving circles are a way of more formally trying to increase those steps up,” she said. “If you get an award, you can put that on your CV and it makes it easier to get other awards. And the money itself can enable you to buy a piece of equipment to do something you might not have otherwise been able to do.”

Engisch said there are plans to grow the giving circle by increasing the number of donors and corporate sponsors. There has been a recent burst of activity to inject momentum into the effort, including rewriting the criteria for grants and scholarships, launching a website, and in April holding a high-profile event on campus attended by top administrators to celebrate the giving circle’s fifth anniversary.

“The more people we have, the more effective we can be and the more actions we can take,” Engisch said. “One thing I see in our future is that by putting all of our voices together, we are able to be heard.”

In addition to increasing awards, Engisch hopes to boost awareness of equity issues and what women are doing in science.

“The circle has other possible benefits such as contributing to an environment that can attract the best female talent out there,” she said.

Learn more about the Women in Science Giving Circle >>