Wright State, others vow to continue advancement of women faculty in STEM disciplines 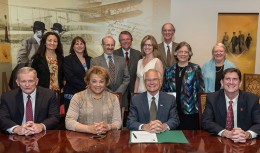 Wright State University and three other institutions of higher learning pledged to sustain an initiative to recruit more women to tenure-track faculty positions in STEM disciplines.

The leaders of Wright State, the University of Dayton, Central State University and the Air Force Institute of Technology signed a joint statement of cooperation May 30 to continue the work of the LEADER Consortium. They also vowed to work on a formal memorandum of understanding in the coming year to detail how they plan to grow the initiative’s successes.

The pledge was announced during a conference in the Apollo Room of Wright State’s Student Union that drew about 100 faculty and administrators from around the region.

“We must have a coalition of committed people; we have that within this LEADER Consortium,” said Wright State President David R. Hopkins. “We need to expand that.” 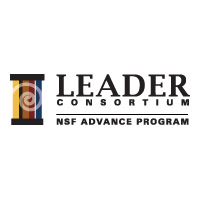 The LEADER Consortium—or Launching Equity Across the Dayton Entrepreneurial Region—is a Wright State-led group of institutions that also includes the University of Dayton, Central State and the Air Force Institute of Technology.

The consortium has collected data on the number of female STEM faculty members at institutions and their workplace climates; established equity advisers who advocate for female faculty and provide information on hiring, evaluation, tenure and professional development; implemented programs designed to promote discussion of policies and practices; and organized large conferences that feature equity experts and promote conversations among administrators on what is needed for institutional change.

A 2008 National Science Foundation grant to support the initiative is coming to a close, and the coalition has been moving toward institutional sustainability.

Since the initiative began, the number of women in tenure-track roles across STEM fields has increased at all four institutions—with Wright State seeing a 33 percent increase.

Hopkins said ensuring faculty equity requires valuing differences between individuals, creating a sense of urgency by being open with data and celebrating early successes to build credibility for change.

“Change is really hard. We know it happens with leadership, collaborations, patience and a relentless commitment to make it happen,” Hopkins said. “Cultures change at the end
of changing policy, changing practices and sometimes changing people.”

Keynote speaker was Abigail Stewart, Ph.D., distinguished professor of psychology and women’s studies and director of the women’s advancement program at the University of Michigan.

“We believe continued attention to the issue has made a difference,” Stewart said.

The audience peppered Stewart with questions, asking what strategies have been most effective, how departments that are slow to change can be changed and whether Michigan has reached a critical mass that will enable change in hiring and the university climate to be sustained.