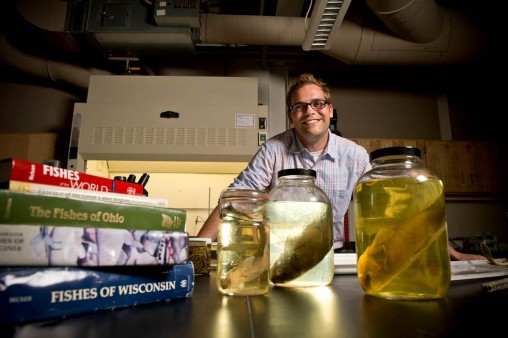 Stephen Jacquemin, a fish ecologist and assistant professor of biology, studies streams and fishes to understand and preserve natural resources.

Stephen Jacquemin has spent a good part of his academic career trying not to become a meal. He has pulled sharks from tangled underwater nets off the coast of Cuba. He has shared solitary nights deep in the Okefenokee Swamp with bears, alligators, snakes and carnivorous plants.

“Everything there wants to eat you,” he said.

Today, Jacquemin, Ph.D., is at Wright State’s Lake Campus, teaching and nourishing the next generation of nature lovers and protectors.

“I go into the area’s streams and sample fishes. I simply ask the questions: What’s here, and why is it here?” he said. “It’s all about conservation. If you can understand how these things relate to their environment, then perhaps you can do something to preserve those resources.”

Jacquemin grew up in rural Delaware, Ohio, surrounded by wooded areas and farms. At Buckeye Valley High, there was even a Drive-Your-Tractor-to-School Day.

“I spent far too much time outdoors as a kid and just never wanted to come in,” he said. “I developed an eye and an enthusiasm for the outdoors that kept me in that environment. There is a certain peace in the outdoors that is just unmatched.”

When Jacquemin saw the movie “Jaws,” a 1975 thriller featuring a great white man-eating shark, his career path as an aquatic ecologist was clinched.

“It was sharks that got me interested in the aquatic environment,” he said.

Jacquemin enrolled at Ohio Northern University to study biology and environmental science. A guitar-playing folk singer, he played the coffeehouses in nearby Columbus to help finance his education.

Then things got interesting.

As part of his education at Ohio Northern, he interned with the U.S. Fish and Wildlife Service in 2005 and was stationed at the Okefenokee Swamp, a shallow, 438,000-acre wetland that straddles the Georgia-Florida border. Jacquemin spent the nights in a shack in the middle of the swamp — by himself.

He quickly learned why the Native Americans called it Okefenokee, meaning land of the trembling earth. Many of the tiny islands are simply floating rafts of peat, as he often learned when beaching his kayak on one under the very watchful gaze of bears, alligators and snakes.

“It’s like a waterbed,” he said. “Sometimes you go through it and sometimes you stay on top.”

After surviving Okefenokee, Jacquemin was off to Cuba to study environmental management at the University of Havana as part of an Ohio Northern program. He and other students stayed in a small residence in downtown Havana, just down from some of the most iconic landmarks associated with the Cuban Revolution, including the Plaza de la Revolución, the Malecón, Habana Vieja, and Coppelia, one of the largest ice cream parlors in the world.

Jacquemin joined Cuban marine biologists in doing surveys of large sharks, rays and other fish inhabiting the coastal waters around the islands’ coral reefs. He would pull sharks as big as eight feet long out of nets, haul them onto the deck of a dinghy, and measure and examine them. He was never bitten.

“Everybody knew where the mouth was, and we took care to respect every animal,” he said.

“One of the largest takeaways of being in Cuba and Okefenokee was being able to explore so many different types of ecosystems,” he said. “After traveling the world and seeing these different ecosystems, I’m able to bring a perspective to my work here in the Midwest that is incredibly useful.”

Jacquemin returned to the Midwest and got his Ph.D. in environmental science from Ball State University in Indiana. He did his dissertation on the evolution of freshwater fish, with most of his fieldwork done on the Wabash River and its tributaries.

Jacquemin came to Wright State because he wanted to be at a place where he could interact with students, teach the courses he wanted to teach and receive the support to conduct research. During his academic career, he has published more than 20 peer-reviewed papers, earned numerous grants and awards, and presented at more than 50 professional meetings.

He is especially excited about his ichthyology course, which has attracted students from as far away as Dayton.

“These students are in the streams; they’re wearing waders; they’re collecting fish,” he said. “They’re looking at a fish community and they’re going to be able to answer at the end of the course: Is this stream a healthy stream?”

Jacquemin said grads can look forward to jobs in fisheries, government agencies, research labs, universities and companies contracted to assess environmental health. He is hoping to help create a new generation of biologists and people obsessed with nature.

“One of the things that is important for humans to realize is that we’re not divorced from the ecosystem; we’re part of it,” he said. “If we have the capability to understand how this natural order functions, it is imperative that we figure this out.”