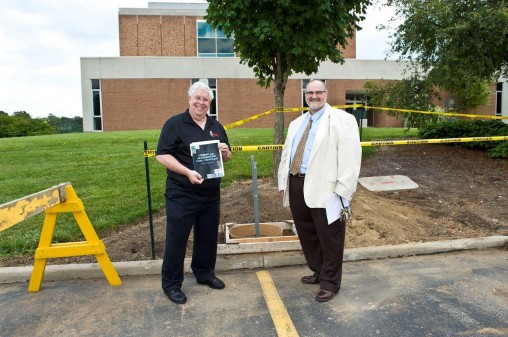 Jim Halderman, left, and Scott Moniaci, associate director of engineering and construction, stand next to the charging-station site outside Allyn Hall.

Wright State University is installing four vehicle-charging stations in prime parking locations for drivers of electric cars and plug-in hybrids thanks to Dayton Power and Light Co. and a $10,000 donation from a retired professor of automotive technology.

Two of the charging stations are located in Lot 1A next to the Russ Engineering building; two are in Lot 10 next to Allyn Hall. The stations are available to students, faculty, staff and visitors with parking permits. Use of the stations is free, but limited to four hours per vehicle at a time.

Donor Jim Halderman, who taught automotive technology at Sinclair Community College and has written 15 automotive textbooks, said his donation is designed to encourage the use of electric vehicles and hybrids.

“I didn’t do this for the publicity,” he said. “I did it because it’s the right thing to do.”

In addition, DP&L is funding the cost of installing two stations at Wright State as part of plans to provide up to 30 stations at 10 to 15 locations around its service area.

“I’m sure we would not have been able to do this if we didn’t have private support,” he said.

Halderman said that when he travels to California as part of research to update his textbooks, he sees charging stations everywhere, including at colleges.

“Then I come back to Ohio and it’s a void,” he said. “Somebody had to do something. So $10,000 is enough to get somebody’s attention. And Wright State has exceeded my expectations.”

Scott Moniaci, associate director of engineering and construction, is hoping to have the stations operational by Aug. 1. They will provide 240 volts of electricity and charge faster than the standard 120 volts from the average residential electrical outlet.

Halderman said the stations will enable users to charge their vehicles while they are studying or working at Wright State, giving them the assurance they will have enough power to get home.

As ownership of electric and hybrid vehicles grows, there is an expanding need for publicly accessible charging stations.  Even businesses are getting involved. For example, Meijer has been installing charging stations at select stores.

Rob Kretzer, Wright State’s director of transportation and parking, was instrumental in finding prime locations on campus for the stations.

“We want to get people’s interest in it, so this is an incentive,” he said.

Halderman grew up in Dayton and got interested in cars at a very young age, building his first car out of a lawn mower engine when he was 11. He worked at a Chevrolet-Oldsmobile dealer in the muscle-car era, driving and working on them.

He taught automotive studies at Meadowdale High School in Dayton for seven years and in 1975 was hired at Sinclair to teach students how to become automotive service technicians.

“That’s when I first discovered there weren’t really any books on automotive service,” he said.

After putting together study guides for his students, he won a publishing contract and in 1987 produced the first of his textbooks, which are designed for use in two-year college programs. One has even been translated into Russian.

“The textbooks have to be technically correct, but they don’t have to be boring,” he said.

Today Halderman is retired but spends his time keeping the manuals up to date. He travels almost weekly for factory training sessions and automotive teachers conferences.

“I know what instructors are struggling with, how to explain things to their students,” he said.

Halderman, who holds a patent  for an electronic transmission control device, believes the cost of energy is going to increase and that electric cars are the future, offering the promise of independence from foreign oil.

“Electric cars are a hoot to drive. They’re very, very fast. They’re quiet. And they are almost zero maintenance,” he said. “No oil changes, no tuneups. Tires are about the only thing you have to do.”

Halderman said Wright State’s decision to install the stations shows that the university is progressive, believes in clean energy and alternative power sources, and is willing to support people who pursue that.

“We’ve got to go electrical,” he said.