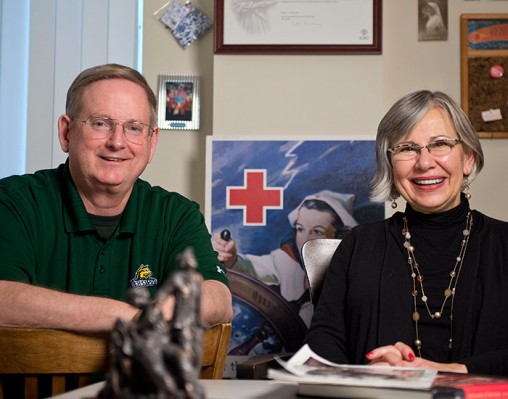 When Hurricane Katrina slammed into the Gulf Coast in 2005, it would become one of the deadliest hurricanes in U.S. history, leaving more than 1,800 people dead. Tens of thousands of volunteers and troops responded to the disaster, including a group of doctors and nurses from Wright-Patterson Air Force Base.

When they returned, they delivered a surprising message to Dan Kirkpatrick, chief nurse of the base hospital — they had trouble working with the civilian disaster relief workers.

“The two groups had different equipment, different leadership models and basically spoke a different language,” Kirkpatrick recalled. “You would get a nurse from Idaho, a nurse from Florida, a nurse from New Jersey who all knew the basics, but they didn’t know how to put it together the same way.”

That revelation followed by teamwork with regional and national partners ultimately led to the National Disaster Health Consortium at the College of Nursing and Health. This group developed a competency-based interprofessional program that is structured to prepare professionals for a national certification exam.

Discussions about starting such a program immediately sparked the interest of Sharon Stanley, Wright State alumna and former chief nurse of the American Red Cross. The Red Cross had been looking for competency-based coursework leading to nursing certification.

“Nurses are hungry to understand how they can make their disaster practice better,” said Stanley, Ph.D., RN, who joined the College of Nursing and Health last fall as a visiting professor and director of the program.

There are about 3 million nurses in the United States — the largest single group of health care workers in the country — and they are frequently involved in disaster preparedness, response and recovery as the largest provider of care, as well.

“There are nurses virtually in just about every neighborhood,” Kirkpatrick said. “Most people know that a nurse lives across the street; if a disaster occurs — a tornado, an earthquake, explosion — they’re going to go grab that nurse.”

Stanley and Kirkpatrick, RN, deputy director of the program, say the program will strengthen disaster response and improve the quality of care.

“If I’m working with you and we come from a common body of knowledge, we can work quicker and better together,” Kirkpatrick said. “If we’ve all been through a common educational process, then we go down the road together in step versus tripping over each other.”

The program is funded in part by the Dayton-based Virginia B. Toulmin Foundation, named after the former public health nurse who was the widow of international patent attorney Harry A. Toulmin Jr. In addition to Wright State and the American Red Cross, the program also has the support of the Air Force, the Medical Reserve Corps and public health officials in Washington, D.C.

“This has been a large effort, with a number of people recognizing the need for this kind of a process,” Kirkpatrick said.

Nurses enrolled in the program will first take a series of online courses. They will then undergo intensive training at Wright State’s National Center for Medical Readiness at Calamityville, a 52-acre disaster training zone with concrete passageway–filled buildings, silos, tunnels, ponds, cliffs and wooded areas.

“This training is going to give them a broad range of different bodies of knowledge and some hands-on experience of how to handle different disaster-related activity,” said Kirkpatrick.

The nurses and others will learn basic disaster life support; disaster leadership principles; first aid; how to provide psychological support; how to prioritize injuries; and how to handle legal and ethical issues.

“It’s not like we’re going to introduce something foreign to them, but we are going to enable them to gain confidence in their disaster skills and put it to work in their communities,” Stanley said.

While the program’s primary focus is on preparing registered nurses, including those with advanced nursing degrees, the model for delivery is one of interprofessionalism. A total of 120 health care professionals will go through the program beginning this fall.

Stanley said the nurses will be trained not only how to respond in the immediate aftermath of a disaster, but also how to help communities recover in the long term.

“It’s not just about pulling the person from the car, although we will teach some of that,” she said. “It is absolutely about what do you do in a shelter for the next month? How do you work with that neighborhood? How do you help people get to their new normal in terms of mental health?”