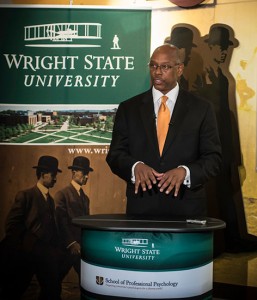 Cedric Alexander, director of public safety in DeKalb County, Ga., and a School of Professional Psychology graduate, spoke at the school’s convocation.

One of the nation’s top law enforcement officials, fresh from a visit to riot-scarred Ferguson, Mo., to help ease racial tensions, returned to his alma mater to address new students at Wright State University’s School of Professional Psychology.

Cedric Alexander — director of public safety in DeKalb County, Ga., which includes part of Atlanta, and president of the National Organization of Black Law Enforcement Executives — is a 1997 graduate of SOPP. He arrived on campus Aug. 22 to speak at the SOPP convocation.

Alexander started his policing career in 1977. After receiving his doctorate in psychology from Wright State — where he did his dissertation on police stress and burnout — he went on to the University of Rochester Medical Center, doing clinical work and serving on the faculty. He later served as federal security director for Dallas/Fort Worth International Airport.

Alexander became a key peacemaker in Ferguson, which was rocked with civil unrest after an African American teenager was shot and killed by a white police officer.

He traveled to Ferguson on Aug. 16 and spent two days there, meeting with community leaders and Ferguson Police Chief Thomas Jackson.

Alexander said both sides agreed that there needs to be training within the police department on cultural differences. Only three of the 55 Ferguson police officers are African American in a city that is nearly 70 percent African American, he said.

Alexander said his message to SOPP students is to let themselves explore all of the career possibilities that will enable them to better their communities and the nation.

“The opportunities are endless for young people who are coming into this program here at Wright State,” he said.

SOPP emphasizes generalist training, giving students broad exposure to theoretical models, clinical skills and professional roles that prepare them for the practice of psychology. A commitment to diversity is reflected in the school’s policies for the recruitment, retention and development of faculty and students and in its curriculum and field placements.