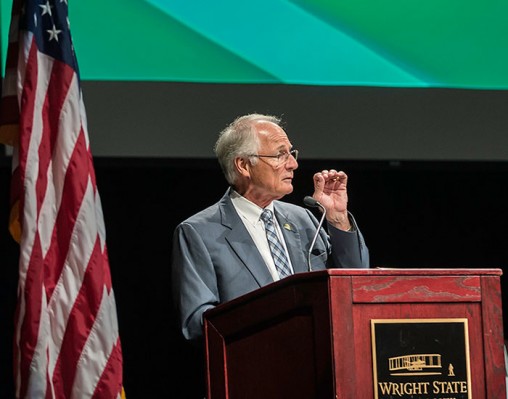 A commitment to research, service and helping students cross the finish line are fueling Wright State University’s drive to create a new model of higher education for the 21st century, Wright State President David R. Hopkins said during his annual State of the University Address Aug. 28.

Hopkins delivered the address Aug. 28 at the 2014 University Convocation in the Student Union Apollo Room. The event also included the presentation of the annual Faculty Awards for Excellence.

He noted that in six years 51 million jobs will be available in the United States and 31 million new jobs will be created, 65 percent of which will require an education beyond high school. Wright State is committed to helping fill this major talent gap, Hopkins said.

Nearly 50 years ago, Wright State opened from humble beginnings, with a mission to respond to the needs of the region, he said.

As the university’s reach and mission have expanded around the globe, he said, Wright State now seeks to meet the needs of the world through numerous efforts, including:
• By helping students succeed and become productive citizens committed to building a better society
• Creating a university where diverse and talented faculty and staff can thrive personally and professionally
• Producing scholarship, ideas and inventions that are relevant to the world

“As a public research university, we accept our responsibility to serve others,” Hopkins said. “We meet our students where they are academically, where they are financially, and where they are experientially. We meet them where they are, and we do everything we can to get them to the finish line of success.”

Hopkins also highlighted major changes occurring on campus, including the construction of the Neuroscience Engineering Building and the Student Success Center and Classroom Building and the modernization and expansion of the Creative Arts Center.

He provided an update of the university’s branding initiative, which he said will be based on telling Wright State’s most compelling stories, the university’s strengths and what the institution stands for.

“I believe the people who come to our university have a deep desire to serve,” he said. “It drives our instincts, guides our decisions.”

Read about the recipients of the  Faculty Awards for Excellence >>

Wright State recognized the recipients of the Faculty Awards for Excellence during the 2014 University Convocation.