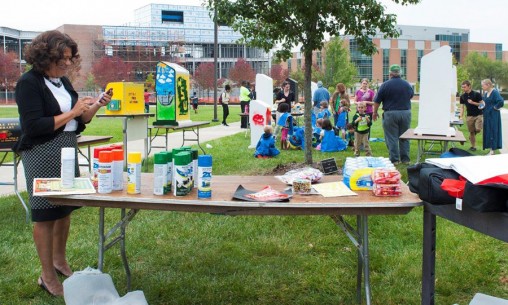 Racks once filled with newspapers on the streets of Dayton will soon be transformed into miniature libraries for school-aged children and their family members thanks to Wright State students.

Hazel Rountree, university ombudsperson, said the goal is to cultivate future learners by introducing them to the joy and empowerment that comes from reading.

“I hope youth and their parents will be inspired,” Rountree said. “That’s my philosophy as an educator — how to inspire young people to be lifelong learners, lifelong readers.”

Rountree came up with the idea when she attended the National Institute for Urban School Leaders at Harvard University in Cambridge, Mass., this summer.

As she walked around Cambridge each day, she discovered that a large group of people would congregate at a certain spot on the street. The attraction turned out to be a wooden box with a slanted roof and a Plexiglas door stuffed with books for the taking.

“It was very exciting to see so many people every day really using it,” Rountree said.

Little Free Libraries are a community movement in the United States and around the world that offers free books housed in small containers to members of the local community. There are now more than 15,000 such libraries worldwide and counting.

At Wright State, new Plexiglas viewing windows were installed in each of the news racks, which were then painted white so each student team would have a blank canvas to decorate.

Decorating supplies such as spray paint, buttons, jewelry, decorative tape and Wright State decals were provided, but teams also brought their own materials.

The women’s basketball team used gold glitter to put logos on their library and affixed a poster of the team. Another library was tattooed with purple hearts. A third gleamed with stars and the words: “Read. Be a Star.”

Prizes were awarded for the finished products.

Beginning in October, Wright State will hold book drives to supply the Little Free Libraries, which will be placed near public housing sites and community centers. Each library will have a steward who will monitor the racks, keeping them clean and trying to protect them from being defaced.

The stewards will be given boxes of books and put 10 or 20 in the racks every week, or as needed. There will be no consequence for not returning the books.

Rountree said many children who live in public housing often don’t have books. She hopes reading the books will give the children an eye-opening view of the world and a sense of belonging to the global community.

“When you read, you feel a part of the world and not just a little bitty part of your neighborhood or your apartment building,” she said. “You are connected.”