Wright State launches its ‘Rise. Shine.’ campaign with a flourish 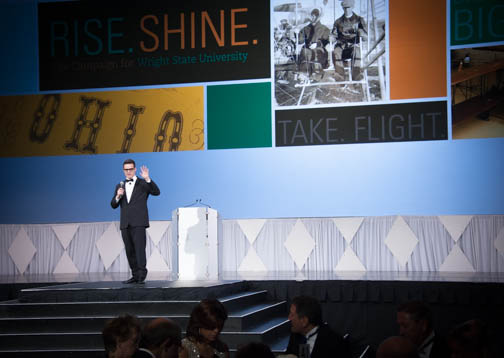 Serving as master of ceremonies at the gala was 1991 Wright State graduate Eddie McClintock, who most recently starred in the popular Syfy series “Warehouse 13.”

The Wright State University Nutter Center was the place to be on Saturday, Oct. 18, with more than 600 guests attending “A Night to Shine. Our Time to Rise.”

The McLin Gym was unrecognizable to guests, who enjoyed its transformation into a chic cocktail lounge for the evening.

The biggest surprise was yet to come in the Nutter Center’s main arena, where guests were greeted with elegant table settings and this breathtaking chandelier.

The program kicked off with speed painter Aaron Kizer, who created images of the university’s namesakes, the Wright brothers. Yes, he painted these upside down!

Eddie McClintock, a 1991 Wright State graduate and star of the Syfy channel series “Warehouse 13,” served as master of ceremonies for the evening.

Amanda Wright Lane, great grandniece of Orville and Wilbur Wright, addressed the crowd as the distinguished honorary chair of the “Rise. Shine.” campaign.

A Steven Spielberg film may have prevented him from attending in person, but national honorary campaign chair Tom Hanks still took the time to record a special video message for guests.

Wright State President David R. Hopkins announced the $150 million goal for the campaign and that more than $107 million had been raised to date.

Rowdy Raider had some fun with 1991 Wright State graduate and master of ceremonies Eddie McClintock.