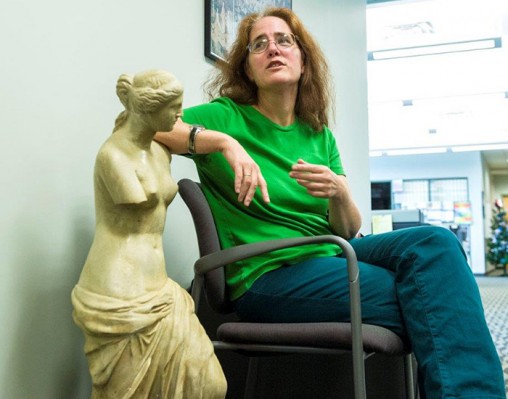 Jeannette Marchand, who teaches archaeology and classics, says she’s motivated by the thrill of discovery on a dig or in research.

Her love for archaeology was fueled by the thrill of unearthing artifacts unseen by human eyes for centuries and unlocking the mysteries they hold. Oh, and also by Indiana Jones.

Jeannette Marchand, Ph.D., associate professor of classics, has made a career out of her passion for archaeology, teaching it as part of Wright State University’s academic program on Greek and Roman literature in the College of Liberal Arts.

“I confess, I loved Indiana Jones. I was going to be one of these dashing figures,” Marchand said. “Of course, that’s not reality at all. But there have been a few moments when I felt a little bit like Indy — like when you find a snake in your trench.”

Not only does she teach archaeology in her classes, but over the years Marchand has taken Wright State students to archaeological digs in Greece — to the ancient city-state of Kleonai and to Dorati, a Bronze Age site that has never been excavated.

But Marchand’s most recent dig was in a sandbox — a simulated dig with elementary school students at the Beavercreek school attended by her 6-year-old twins. And it was no pretend thing.

“I wanted to do something real,” Marchand said.

So she bought 27 clay plates that serve as bases for planters, painted designs on them and then smashed them with a hammer, trying to keep the shards big enough so the children could put them back together like a puzzle.

Using tent stakes and tape, Marchand created a grid in the sandbox, dividing it into nine separate squares. She then buried three broken plates in each square.

On the day of the three-hour dig, Marchand gave a little lecture, telling the children that pottery was something ancient people of almost all cultures made and is the single most common thing found during excavations.

“I talked about how much more you can tell about a culture from its pottery if you know what you’re looking for and what kinds of information you can get out of it,” she said. 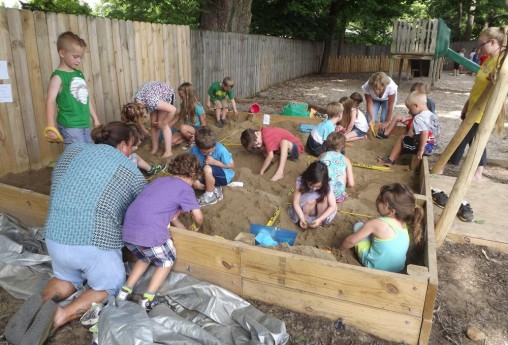 Jeannette Marchand simulated a dig for Beavercreek elementary school students to teach them about archaeology.

The sandbox represented the site of the fictional town of Herakleia, named after Heracles, a divine hero in Greek mythology.

Marchand had painted the plates four different colors, with each color representing a different time period. Then she had painted designs on each plate that included sealife, horses and grapes to correlate with the “coastal,” “plains” and “mountain” sections of the site. The designs also depicted the labors of Heracles, which Marchand copied from ancient vases.

The children collected as many pieces of the pottery as they could, used the differing colors and a site map to determine in which direction the town had grown, and then used the designs to identify the activities of the inhabitants.

Discovering the pottery pieces and then puzzling out the clues seemed exciting to most of the children, Marchand said.

“So much of what interests us as adults was presented to us in an interesting way when we were children,” she said. “I’d like to see a little more enthusiasm about engaging kids in what’s exciting about liberal arts.”

Marchand grew up in California and developed a passion for archaeology as a college student after her parents enrolled her in a summer program digging for Native American artifacts, thinking that living in a tent for six weeks would discourage her.

“I came back thinking it was the greatest experience in my life,” she recalled. “I loved digging in the dirt. And when you actually find something that nobody has seen for thousands of years, it’s just exciting.”

Marchand got her bachelor’s degree in classics from Pomona College and her Ph.D. from the University of California, Berkeley, where she was in the Graduate Group in Ancient History and Mediterranean Archaeology. She joined the faculty at Wright State about eight years ago.

Marchand said a classics degree is a great foundation for business, graduate school, law school and the medical sciences.

“A classical education says that you are very well educated, are well read and are somebody who is going to succeed,” she said. “It says you are a serious student and have excelled in something extremely difficult.”

Marchand teaches Latin, ancient Greek and the great texts of Homer, Virgil and Sophocles. But she also teaches material culture, including a course called Greek Religion and Sanctuaries.

“You have to use material culture to get a sense of daily life and to answer so many of the fundamental questions about what these people really thought and how they really lived,” she said.

Marchand readily admits the thrill of discovery, which occurs both when an artifact is uncovered and when its significance is uncovered through painstaking research, is what motivates her work.

“This is the stuff you do because you’ve got a passion for it and because it’s exciting and interesting and mind expanding, not because it has some immediate purpose,” she said. “It’s the kind of stuff that’s intellectually stimulating and makes you want to think.”

She said the Wright State students she took to Greece had the same reaction as the sandbox kids when they unearthed a tiny piece of pottery.

“You would have thought they had won the lottery,” she said.