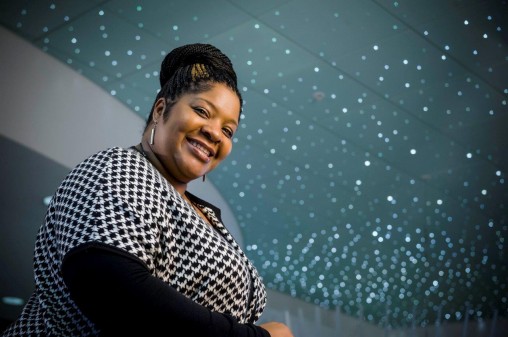 Gwendolyn Reynolds, a 48-year-old single mother, is poised to get her B.A. from Wright State in social work, overcoming a series of setbacks that would have derailed most other students.

She got it from her father — her piston-powerful drive.

Known affectionately as “Giggling Willie,” her father had an infectious laugh that masked a lifetime of pain.

After his legs were crushed in a lumberjacking accident, he underwent 13 amputations, beginning at his baby toe and moving up his legs. But for the rest of his 86 years as a barber, he would stand on those legs and cut hair, even that of the doctors when he was in the hospital.

“I never saw my dad cry, but I saw him in pain,” said Gwendolyn Reynolds. “A lot of my strength I draw from him. He taught us that no matter what is going on in your life, you don’t give up.”

Reynolds has not. The 48-year-old single mother is poised to get her bachelor’s degree in social work from Wright State University this spring.

She has shouldered ahead despite deaths in the family that included a suicide, the loss of a job and her house, and the evaporation of financial aid that threatened to derail her college career in the 11th hour.

And she owes much of her success to her son, Gerron, who at age 15 pushed his mother back to college and insisted she get her degree before he did.

“Wright State has given me confidence,” she said. “I have found out who I am and realize how smart I am.”

The youngest of four children, Reynolds grew up in Trotwood. Her family had moved from Tennessee to the Dayton area, where her father operated Henderson’s barber shop.

Her older brother and sisters all graduated from college.

“But I always felt like I was never smart enough,” she said.

In 1984, Reynolds enrolled at the University of Cincinnati, but returned home because she was homesick. She later completed a quarter here and there at Sinclair Community College in Dayton, but would always drop out.

“As soon as I saw him, my whole world just changed,” she said. 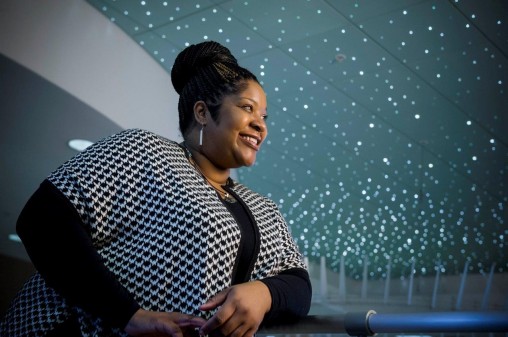 In addition to taking classes, Gwendolyn Reynolds works full time for the Ohio AIDS Coalition and interns at Erma’s House, which provides a supervised environment for children to visit their non-custodial parents.

Gerron was special. He was reading by the age of 4 and in the second grade won the eighth-grade spelling bee, beating out 32 eighth graders. By the fifth grade, he was reading at a 12th-grade level.

In the meantime, Reynolds was bouncing from job to job. And finding a new job was difficult because she had no college degree.

One day, her son sat her down at the kitchen table, presented her with a college application and packet of admissions information from Sinclair, and even offered to go with her to enroll.

“So after all of those years of taking a class here and there and just quitting and not being able to do it for myself, I knew that I could do it for him,” she said.

Reynolds started at Sinclair part time in 2005. Majoring in social work was the logical choice.

Dubbed the “little nightingale” by her sister because she was always helping others, Reynolds was the one who changed her father’s bandages, talked to the doctors and even found social services for her father’s friends in the hospital and nursing home.

In 2010, she transferred to Wright State. But during every quarter and semester she faced a major obstacle that would have made it easy for her to quit.

It was a steady stream of bad news. She had surgery on both ankles and spent a year on crutches, she lost her home in a bankruptcy proceeding, a cousin committed suicide, and her brother was diagnosed with kidney cancer.

“I wanted to lay down and just quit,” she said. “Then in September I really freaked out because I found out I had no more financial aid. I thought that after all I had been through, it was this that was going to do me in.”

But an employee in Wright State’s Office of Financial Aid took Reynolds under her wing and helped her apply for assistance. A few days later, Reynolds was awakened by a text message on her phone telling her she had qualified for the Gladys Turner Finney Scholarship and the Graduation Fund that would pay for tuition and books for her final two semesters.

“I just started crying tears of joy,” she said. “It was the first time I had this visual of me walking across the stage and accepting my degree and a visual of my son smiling. I’m going to be able to keep my promise to my son because I know this is going to mean the world to him.”

Reynolds is scheduled to graduate one week before her son graduates from Middle Tennessee State University.

“I promised myself and my son I would not stop,” she said. “It’s been me and him on this ride.”

Reynolds currently works full time for the Ohio AIDS Coalition and is an intern monitoring family visitation at Erma’s House, which provides a supervised environment for children to visit their non-custodial parents.

She plans to pursue her master’s degree in social work and hopes to someday work for the Veterans Administration or Centers for Disease Control.

Reynolds says Wright State has given her confidence and a new life.

“I found myself while I was here,” she said. “I didn’t expect that.”