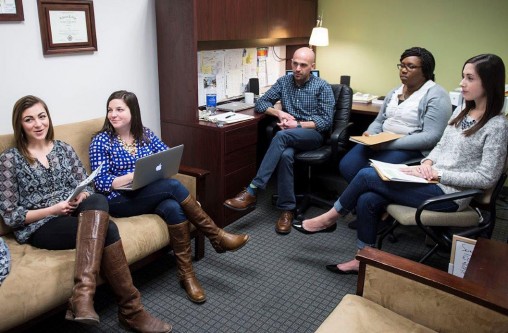 Thin, toned women. They stare out from magazine covers, television ads, billboards, Facebook posts and virtually every medium. Images of their so-called ideal body type are so pervasive and relentless that they’ve become an accepted part of the landscape.

But there is a dark side. This “thin ideal” rattles the self-esteem of many young women and can lead to body dissatisfaction and full-blown eating disorders. Up to 10 percent of the female population may have clear clinically diagnosable disorders or subclinical disorders.

Wright State University is playing a part in helping to change that.

A group of students pursuing their Psy.D. degrees at the School of Professional Psychology is launching a study for the Body Project, a national research/prevention program designed to help young women resist sociocultural pressures to conform to the thin ideal as well as to improve body satisfaction and reduce eating disorders.

“It’s the leading eating-disorder prevention program out there,” said assistant psychology professor Christopher Modica, Ph.D., who is supervising the students on the project. “In my career, this is maybe a once-in-a-lifetime thing.”

The idea for the project at Wright State began when Modica began communicating with Eric Stice, a senior research scientist at the Oregon Research Institute and an expert in eating disorders, obesity and depression. Stice is the creator and manager of the Body Project.

“The goal is to improve body satisfaction and mood, reduce the use of unhealthy weight-control behaviors and decrease binge eating and other eating-disorder symptoms,” Modica said. 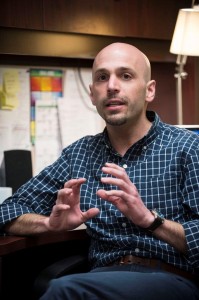 The Wright State project will be led by four student researchers. Once they design the study, get Institutional Review Board approval and receive training from Stice, they will recruit young female Wright State students to take part in the study by meeting in groups of six to 10 beginning fall semester.

Student researcher Jill Klotzman, of Cleveland, said the Body Project at Wright State will focus on the role of the media in promoting the thin ideal. She believes the problem is at nearly epidemic levels.

“We’re trying to raise awareness about this thin ideal because a lot of times it’s almost subliminal,” said Klotzman, who plans to use some of the results in her dissertation.

Student researcher Christina Zawalski, of Rochester, N.Y., said she has heard comments from her female peers such as: “I’m not going to eat for a week so I can fit into my dress this weekend.”

“People tend to think it’s not such a big deal because it’s such a part of our community and our society,” said Zawalski.

“They buy into it and say, ‘Yeah, women should look like that and I want to look like that,’” he said. “It becomes part of how they evaluate themselves and others.”

The student researchers will measure the degree to which young women approve or disapprove of their bodies, the degree to which they internalize the ideals and any eating-disorder behaviors. The students will then go through the Body Project program, be re-measured and perhaps measured again two months later.

“We will be looking for decreases in problematic eating behaviors and/or eating disorders, the degree to which they’ve internalized these ideals of what is beautiful and decreases in body dissatisfaction,” said Modica.

He said research has shown that the positive effects of the Body Project on its participants can last up to three years.

Student researcher Stephanie-Jane Okpara, of Riverdale, Md., said the researchers are looking for students who express some kind of body dissatisfaction so that their progress can be measured.

“What I like about the Body Project is they have exercises that enable the participants to challenge other people,” said Okpara, adding that the program will give students ammunition to rebut and educate when it comes to perceptions about the thin ideal.

One of the exercises will be to show the test subjects different photos of supermodels and ask them what features they think are “ideal” but unrealistic, such as small waists and large chests.

“I think that by helping them identify that this isn’t realistic, we can increase their cognitive dissonance and let go of this belief,” said student researcher Erin Maggard. “By pushing that, they’re going to adopt more of a healthy mindset.”

“It’s a way of protecting the disorder; they don’t want it to go away. It’s that fear of being fat,” she said. “So it takes some coaxing and challenging those beliefs over and over.”

Klotzman hopes the Body Project teaches students how to start a conversation about the problem.

“It’s something that we don’t really talk about because it’s so ingrained in our society; it’s so normalized,” she said. “We want to give these students skills not only to improve their own self-image, but teach them how to be advocates. We’re trying to get girls to focus more on health rather than just focusing on body shape.”

Klotzman wants to have a career helping people with eating disorders.

“I think there is a widespread misunderstanding that eating disorders are a lifelong affliction,” she said. “There is such a thing as full recovery from eating disorders.”

Modica said the Body Project sessions will be a place where students can come and talk about the origin of their body-image concerns.

“And it’s an opportunity to evaluate whether you want to accept messages that society gives you or not, and analyzing the costs of accepting them and the benefits of rejecting them,” said Modica. “It’s an opportunity to get to a place where you accept who you are, accept your body and have a much clearer sense of what you think is beautiful and not put so much pressure on yourself to fit some ideal that’s really unattainable.”