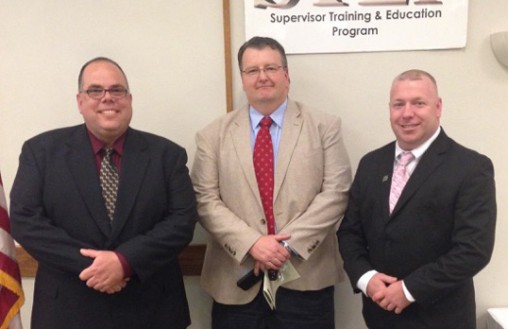 Over the course of three weeks, officers are taught how to create an ethical environment, respond to domestic violence calls, respond to shooting and patrol operations, effective writing and other skills.

The program is for Ohio law enforcement officers only. There are 260 STEP-trained officers in Ohio.

All four of the Wright State sergeants have completed the program as a requirement set forth by Wright State Chief of Police David Finnie.

Ammon has served the Wright State community for 12 years of his 17-year career in law enforcement. He serves as the Dayton and Lake Campus supervisor and crime prevention manager.

“This was a fantastic training program, and I had the opportunity to be in the same class with some fantastic law enforcement professionals from all around the state of Ohio, which was a blessing,” said Ammon. “My goal is to utilize the training I received to make sure that both campus communities receive the highest level of service possible while building stronger relationships between the Police Department and the campus communities.”

Finnie said, “Ammon is very passionate about his duties in the area of crime prevention. He is a role model for officers who wish to be part of the crime prevention unit here at Wright State.”

What sets Coy apart is that he is a sergeant dedicated to the community and to the Police Department, Finnie said. He has a special uniqueness that he brings to Mini U, where he enjoys interacting with children.

Coy worked 15 years prior to coming to Wright State. He has served at Wright State for about 12 years. He said that he wished he had the opportunity to take the STEP classes eight years ago when he was first promoted to sergeant.

“Of all the sergeants that have attended, I am confident that STEP has made them better leaders for the Police Department and the Raider community,” Finnie said.