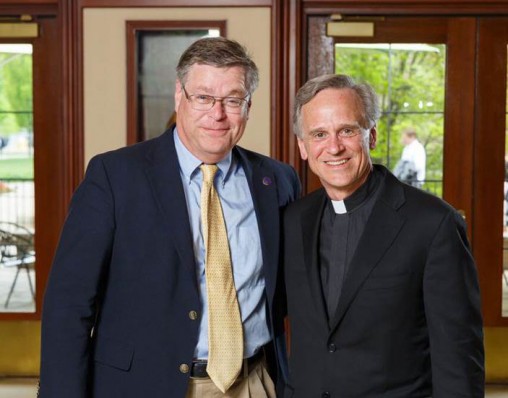 Dan Krane, biology professor and president of the faculty at Wright State in 2013-14, served an American Council on Education Fellowship at Notre Dame. He is pictured with Notre Dame President Fr. John Jenkins.

His fellowship at the University of Notre Dame produced leadership training in budgeting, strategic planning and fundraising. But for Wright State University biology professor Dan Krane, there was something he didn’t see coming.

“I frankly marvel at the change I see in myself,” Krane said. “I expected to grow intellectually. And I thought that I might grow spiritually a little bit because of the nature of the institution. But I grew a lot more spiritually than I anticipated. I like the change. There’s a calmness that I have.”

Krane, president of the faculty in 2013-14 and chair of the Ohio Faculty Council, is back home at Wright State after spending nearly a year at Notre Dame as an ACE Fellow of the American Council on Education, a prestigious honor designed to prepare emerging leaders for senior positions in college and university administration.

“By far the central highlight was the time I spent shadowing Dr. Hopkins and discussing with him various aspects of leadership and decision-making in higher education,” said Stone, who returned to Northern Illinois in May. 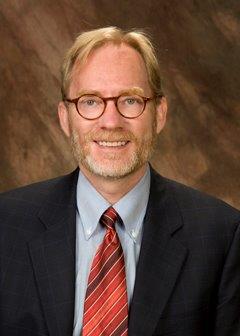 ACE is the major coordinating body for all the nation’s higher education institutions, representing more than 1,600 college and university presidents.

Nearly 2,000 higher education leaders have participated in the ACE Fellows Program since its inception, with more than 300 Fellows having served as chief executive officers of colleges or universities and more than 1,300 having served as provosts, vice presidents and deans.

Krane and Stone were among 28 ACE Fellows who did their fellowships at universities around the nation this year. The Fellows also took part in several multiple-day retreats — in Atlanta, San Diego, Chicago and Washington, D.C. — where they studied university budgeting, strategic planning and diversity.

At Notre Dame, Krane lived in a campus apartment — next to that of President John Jenkins — and would attend the daily 6:45 a.m. Masses at the Crypt of Sacred Heart Basilica.

“I thought that was an important part of the Notre Dame experience,” Krane said, adding that he also regularly attended campus sporting events.

“What makes Notre Dame special is that their students and ultimately their alumni have a phenomenal, unrivaled loyalty and devotion to the institution,” he said. “There is nothing else like it anywhere.”

Krane says Notre Dame’s “secret sauce” is assigning freshman students to a specific residence hall, where they remain for their entire college careers.

“There is a real sense of community, and each residence hall has its own distinctive character,” he said. “Each hall has a rector who serves as a father figure. And the rectors know every last student by name.”

There is no corporate advertising on campus. Instead, Notre Dame advertises itself, putting brand before revenue and building loyalty.

“Maybe one thing Wright State can learn from Notre Dame is to pat itself on the back a little more,” Krane said.

While he was there, Krane helped Notre Dame explore the possibility of starting a research institute, modeling it after the Wright State Research Institute.

Stone attended Boston University, where he obtained bachelor’s and master’s degrees looking at the intersection of law and psychiatry that included a year at Harvard Law School. He then obtained his Ph.D. looking at technology through the lens of seven disciplines. His dissertation explored the philosophical limits of expert systems technologies and artificial intelligence, for which he received the best dissertation award.

Working at Harvard Medical School and School of Public Health and at Tufts University School of Medicine, Stone developed expertise in youth violence prevention, alternative medicine and public health. He also founded and directed a research center in Europe that focused on the needs of the Balkan countries after the wars there ended.

“But my real field of study turned out to be how scientific disciplines actually work to create knowledge and how limiting an objectifying approach to knowledge creation turns out to be,” he said.

At Wright State, Stone participated in meetings of the Ohio Inter-University Council and the Ohio Faculty Council and spent time working with leadership and staff in finance, planning and emergency management. He lived in Laurel Hall with freshmen students.

“This gave me wonderful perspective on the effects that housing and dining policies have on the students, and it reminded me what freshman year was like,” he said. “I have to say the Wright State students were much more well-behaved than I remember my BU classmates and I being.”

Stone took the leadership lessons back to Northern Illinois, where he will work on initiatives in enterprise risk management and capital planning.

Krane said he is eager to put some of the insights of his experience at Notre Dame to work at Wright State.

“I want to take a turn at bat,” he said. “I’ve done the training, I’ve done the exercises, the conditioning. I think I can make good contact with the ball.”