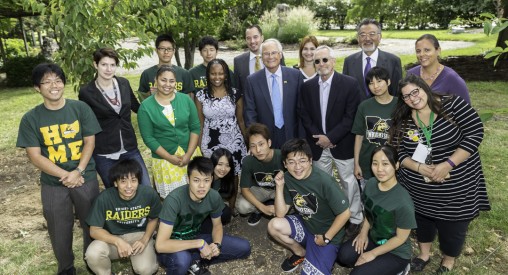 Wright State President David R. Hopkins joined nine Japanese exchange students who studied at Wright State this summer and other officials at a tree planting ceremony in the Garden for the Senses. The Japanese cherry tree is pictured in the upper-left-hand corner. (Photo by Will Jones)

A Japanese cherry tree is now growing in Wright State’s Garden for the Senses as a living symbol of a long-running student exchange program between the university and Japan’s KAKE Educational Institution.

The young cherry tree, which comes from Japanese stock and was grown in Ohio, is designed to symbolize the exchange program’s strength and success.

“I’m so happy that we have this relationship,” said Wright State President David R. Hopkins, who took part in the Aug. 25 tree-planting ceremony. “We’re really proud of our relationship and our friendship.”

Attending the ceremony were nine Japanese students from the Okayama University of Science and other KAKE institutions throughout Japan who are taking part in the 2015 exchange program at Wright State, from Aug. 13 through Sept. 1.

Also attending the ceremony was Shozo Azuma, who served in the Japanese Diet and was vice foreign minister as well as senior vice minister for disaster management .

The founder of the KAKE Educational Institution, Tsutomu Kake, was the ninth child of a poor family from Hiroshima. Following the atomic bombing of his city during World War II, Kake worked to bring countries together through education and international exchanges.

Michelle Streeter-Ferrari, director of Wright State’s University Center for International Education, said the university is currently looking at ways to deepen the partnership with KAKE through faculty exchanges and research.

“There is so much instability in the world, and with international programs you always wonder where the partnerships are going to lead,” said Streeter-Ferrari. “But with KAKE, it’s the one thing that has always been stable, one opportunity we always know is going to be secure and successful.”

During the exchange program, the Japanese students stay with American families in their homes. Besides taking English language and culture classes, the students this year visited the National Museum of the United States Air Force, Amish country, the Glen Helen Nature Preserve and the Ohio Statehouse.

Wright State students who travel to Japan as part of the program likewise stay with Japanese families. Some of them have since gotten jobs with Japanese companies in the United States.

“They are placed with Japanese families so they get a greater understanding of the culture, but they also have personal bonds,” said Victor Hazen, a Wright State alumnus who works for KAKE.

Hazen hopes that the cherry tree at Wright State will result in an hanami — a viewing party or festival to mark the Japanese custom of enjoying the transient beauty of flowers.

“Every spring when it blossoms, it will be a visual testament — a reminder — that the students can see,” he said.