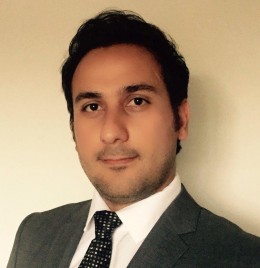 Behzad Ghanbarian ’14 will receive the Donald L. Turcotte award by the nonlinear geophysics focus group of the American Geophysical Union for his dissertation on the physical and hydraulic properties of rocks and soils.

Ghanbarian will be presented with the Donald L. Turcotte award by the nonlinear geophysics focus group of the American Geophysical Union at the group’s December meeting in San Francisco. It is billed as the largest earth and space science meeting in the world, expected to draw nearly 24,000 attendees.

Turcotte was known for applying dynamical systems to geological problems, including crustal deformation and seismicity. The Turcotte award is given annually to one honoree in recognition of outstanding dissertation research that contributes directly to nonlinear geophysics.

“Winning the Turcotte award is absolutely a great honor,” said Ghanbarian. “I feel like all of my hard work during my Ph.D. program at Wright State bore fruit.”

Ghanbarian’s Ph.D. dissertation focused on modeling the physical and hydraulic properties of disordered and complex rocks and soils using theoretically based models from physics and math.

“Understanding fluid flow and solute transport is essential and has broad applications in soil physics, hydrology and civil and petroleum engineering,” he said.

He credited the support of Wright State professor Allen Hunt, who has a joint appointment in the departments of Physics and Earth and Environmental Sciences and whom Ghanbarian calls a “once-in-a-lifetime adviser.” Hunt is a pioneer in porous media — hydrology, hydrogeology and soil physics — and an expert in fractals and percolation theory.

In 2013, Ghanbarian, whose home department was Earth & Environmental Sciences, won Wright State’s Graduate Student Excellence Award. He graduated in May 2014 with a Ph.D. in environmental sciences. He has had dozens of papers published in international, peer-reviewed journals.