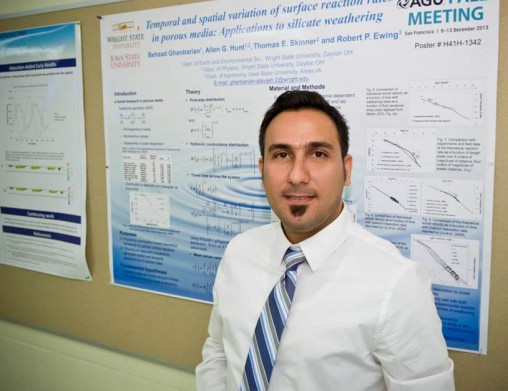 On Salsa Night at Dayton’s Therapy Café, chances are you will find Behzad Ghanbarian tearing up the dance floor. The Wright State University graduate student from Iran finds release in the feverish Latin moves.

When it’s not Salsa Night, Ghanbarian can usually be found in front of his computer screen conducting research and working on his next paper. The environmental sciences Ph.D. student—who is rocketing to the top of his field—has practically become a publishing house.

His papers focus largely on soil-related topics, with titles such as “Universal Scaling of Gas Diffusion in Soil Media to Evaluation of Soil Texture Data for Estimating Soil Water Retention Curve.” And he has co-authored a book titled Percolation Theory for Flow in Porous Media.

“I enjoy writing papers; I enjoy publishing papers,” he said. “I want to be a really good scientist in the porous-media community. In order to reach my goal, I have to do research over and over.”

“He also has collaborations that he established without any help from me with scientists in Brazil, Cuba, Italy, Iran and China, among others, meaning that he has established collaborations in North and South America, Asia, Europe and Oceania,” Hunt said.

“You want to know how much water is getting out, and you have to get it back by irrigating,” he said. “The results were really interesting.”

As he rose in agricultural academic circles, Ghanbarian remained laser-focused on his career. Once while conducting research in Trieste, Italy, he chose to remain glued to his computer screen while fellow students went sightseeing in the beautiful, fairy-tale city of Florence. (Ghanbarian still gets that wish-I-would-have-done-that look in his eye.)

Hunt is a pioneer in porous media—hydrology, hydro geology and soil physics—and an expert in fractals and percolation theory.

“Nobody had done what he had done,” Ghanbarian said. “Coming to Wright State and working with him was a dream come true. It was the best choice I ever made in my academic life.”

In 2013, Ghanbarian won Wright State’s Graduate Student Excellence Award. In the meantime, he continues to write and publish papers.
“In my life, there is no time to waste,” he said. “If I don’t have a topic to work on, I read other articles. I get ideas from an article, compare it to previous ideas and come up with a new idea.”

Ghanbarian plans to do post-doc work at the University of Texas at Austin in petroleum geosystems engineering beginning in July.

“They want to know how water or oil flows through the media, so we’re going to have some numerical simulations that I’ve never done before,” he said. “I like it because any time you learn something new, that means you are alive and moving forward.”