Air Force scientists and engineers more accustomed to microscopes and test tubes donned battle gear and grabbed M-16 rifles for a 10-day combat exercise at Wright State University’s National Center for Medical Readiness to field-test the technologies they helped develop in the lab.

The Tech Warrior 2015 exercise featured simulated sniper ambushes and chemical attacks that enabled civilian employees from the Air Force Research Laboratory at Wright-Patterson Air Force Base to learn how technologies such as body sensors, data-embedded eyeglasses and communication tablets are actually used when the users are under fire.

“What this exercise allowed us to do was to take a scientist or engineer and immerse them into an operational environment,” said Lt. Col. David Shahady, exercise commander. “We’re trying to train them to better understand what the warfighter goes through.” 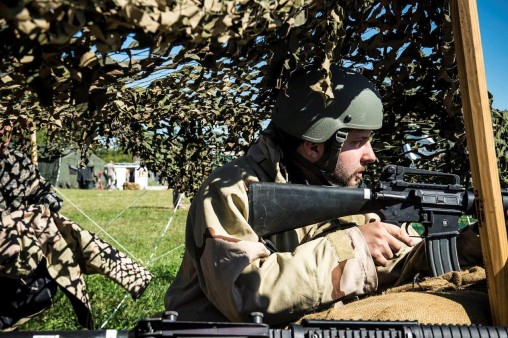 To observers, it felt real enough. For a few moments, they were in war-torn Afghanistan or Iraq. An improvised explosive device went off. A sniper opened fire on a convoy of Humvees. A chemical weapon was unleashed.

All of the action was captured on cameras deployed throughout Calamityville, a 54-acre disaster training zone with concrete passageway-filled buildings, silos, tunnels, ponds, cliffs and wooded areas.

About 200 participants and staff members — half civilian and half military — took part in the exercise, most of them camping out the entire time. Olive, tarp-covered tents and stacks of burlap-sacked sandbags freckled the Calamityville landscape. Humvees and transport vehicles matted down the grass and stamped treads into the dirt.

The scientists and engineers patrolled the site with real M-16s.

“Some folks have never even held an M-16 or a weapon,” said Shahady. 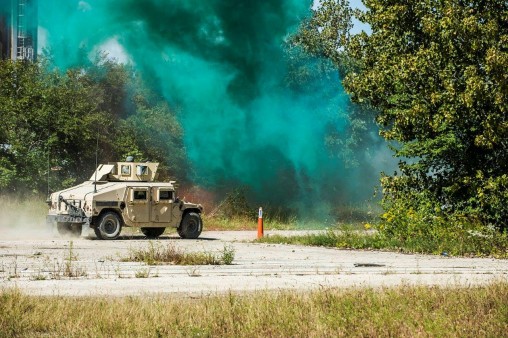 The training exercise including improvised explosive devices and sniper fire on a convoy of Humvees.

The exercise focused on technologies that involve control and command, intelligence and information gathering. Lightweight body patches attached to the soldiers streamed physiological data such as heart rate and body movement.

Eyeglasses with data displayed on the inside of the lenses were tested to get feedback from the soldiers in the field. The data can give soldiers enhanced situational awareness, giving them navigational tools and helping them differentiate friendly forces from the enemy. It all enabled the technology to be tested, developed and refined at a much faster pace.

The exercise also enabled the laboratory scientists to see things through the eyes of the soldiers. For example, the scientists may have come to realize how burdensome it would be to add a four-pound battery pack to all of the gear already being lugged around by the soldiers.

In the command center, officials used the cameras to monitor the action and communicate with the soldiers. One official monitoring the action from a video console wore eyeglasses with iris sensors that tracked her eye movements and recorded everything she saw as part of an effort to develop the product faster.

The soldiers in the field carried tablets that enabled them to see their environment from multiple angles and communicate with each other and the command center via text, chatrooms and sharing photos.

“We’re learning all sorts of neat things about how the guys out there are using the tablets in ways we had never even anticipated,” he said. 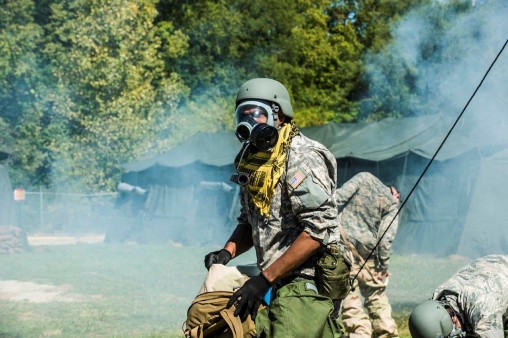 The training exercise focused on testing technologies that involve control and command, intelligence and information gathering.

“It’s been the best exercise I’ve been a part of, and I’ve been part of quite a few exercises,” said Shahady.

Jim Gruenberg, deputy director of the National Center for Medical Readiness at Calamityville, believes the exercise demonstrated to the Air Force that not only can Wright State provide a good site, but also the expertise to design complex scenarios.

“We would like to capitalize on this partnership and explore ways that we can include the civilian response community to this or a similar exercise environment,” he said.