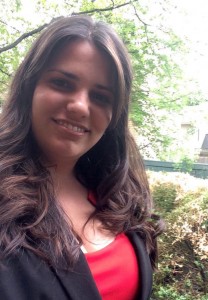 Cuban journalist Elaine Díaz Rodriguez is visiting Wright State Sept 24. and 25 as part of the university’s Year of the Active Bystander program.

Increasing freedoms and the restoration of diplomatic relations with the United States have given new hope to the young people of Cuba, Cuban journalist Elaine Díaz Rodriguez told an audience at Wright State University.

Díaz spoke to about 100 students, faculty and staff in the atrium of Millett Hall on Sept. 24. Her talk, titled “Cuba in an Era of Change,” was part of Wright State’s Year of the Active Bystander program.

Cuba and the United States restored diplomatic relations on July 20. They had been severed in 1961 during the Cold War.

Díaz said many young Cubans now want to stay in Cuba and see if the future brings more opportunities and a better life.

“In young people, we are going to see a lot of hope,” Díaz said. “It’s very encouraging.”

Díaz is a journalist, blogger and former professor at the University of Havana, where she taught courses from 2008 to 2015 on digital journalism, communication, technology and society, and alternative journalism on the web.

As part of her fellowship at the Nieman Foundation for Journalism at Harvard University, Díaz launched an independent media outlet in Cuba called Periodismo de Barrio and is currently editor-in-chief.

Díaz said that until recent years, she and her countrymen were barred by the state from staying in Cuban hotels, owning cellphones and buying or selling computers, cars and houses.

Díaz said the Cuban government has lifted these restrictions over the past seven years. In addition, restrictions on foreign travel and self-employment have been eased.

She said a growing number of Cubans have access to the Internet, resulting in a proliferation of blogs that strengthen communication and tell the world about daily life in their country.

These moves have spurred the Cuban people to ask why they cannot have even more freedoms, Díaz said.

The audience peppered Díaz with questions about equality issues, wages, careers and press freedom in Cuba.

Díaz is also scheduled to discuss the future of Cuba on Friday, Sept. 25, during an Honors Dialogue in 160 Rike Hall beginning at 3 p.m.

The Year of the Active Bystander was designated by Wright State’s Division of Multicultural Affairs and Community Engagement as part of stepped-up efforts to help students, faculty and staff respond productively to prejudice they encounter in their daily interactions.