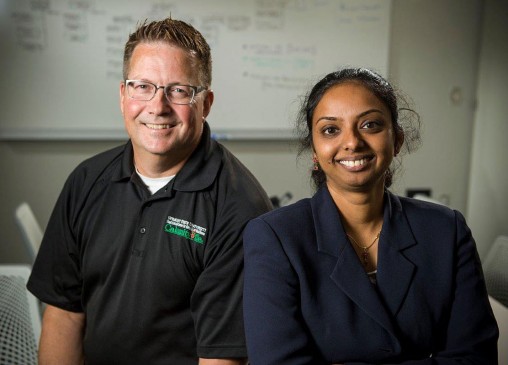 Wright State assistant professor Subhashini Ganapathy is collaborating with Jim Gruenberg, deputy director of Wright State’s National Center for Medical Readiness at Calamityville, on research that aims to improve communication and decision making among first responders during a disaster. (Photo by Chris Snyder)

Improving life-or-death decisions in response to terrorist attacks, chemical spills and other disasters is at the heart of a research project led by Wright State assistant human factors engineering professor Subhashini Ganapathy.

Gananpathy is principal investigator on a two-year, $175,000 seed grant from the National Science Foundation’s cyber physical systems group, along with co-investigators John Gallagher and Michelle Cheatham.

The area of research for Ganapathy, who works in the Department of Biomedical, Industrial and Human Factors Engineering in the College of Engineering and Computer Science, is human-computer interaction and how to use technology to enhance human performance. She and her team are working on a simulation model for an instant disaster-management command system.

“Current systems are pen-and-paper, and a lot of information is lost as humans communicate,” she said. “We think we can improve that. How do we build these visual simulation models that can help humans make better decisions?”

The goal is to develop a smartphone app that would enable responders to communicate with each other, understand what resources are available and improve the response.

“For example, you could get information that the water is contaminated and so you would probably not send your vehicle through it,” she said.

Jim Gruenberg, deputy director of Wright State’s National Center for Medical Readiness at Calamityville, said it is often difficult to overcome communication gaps among agencies in a disaster. That can mean commanders may lack important information to make decisions.

“Sometimes they don’t know what they don’t know,” he said. “So that information may exist somewhere in the command structure, but it hasn’t been transmitted through the right pathways or hasn’t made it to the decision-makers themselves. That really hampers the ability to make well-informed decisions, and it slows decision making.”

Gruenberg and other planners will help bring subject matter expertise to the model and then test it. He believes the model will give disaster response planners access to important research, identify where information hasn’t been transmitted, bridge those gaps and increase the information flow.

The model is expected to be tested at Calamityville in late 2016 or early 2017. It will be tested in a scenario in which a small private airplane has intentionally been crashed into a chemical plant.

A major question will be whether responders from different disciplines will be able to easily adjust to the new model.

“They are trained in their traditional systems, so we want to see if there is a cognitive overload when they move into the new system,” Ganapathy said.

About 120 undergraduate students from Ganapathy’s engineering classes will help with the research as part of a senior design project.

Ganapathy and her team are also working with the Clark County Emergency Management Agency to see how the model can be applied in real-world situations.

Ganapathy’s project was one of 12 new projects announced by the National Science Foundation during a White House ceremony on Sept. 14.

The university researchers from around the nation who are working on the projects will participate in the 2015 Global City Teams Challenge, which is designed to showcase novel approaches in integrating computer systems and physical devices and potentially transform communities around the world.

In a separate project, Ganapathy is working with Miami Valley Hospital’s trauma and surgery department to learn how mobile devices can be used to quickly provide information on certain details of surgical procedures.

Before joining the faculty at Wright State three years ago, Ganapathy worked at Intel Corp., helping the company improve user experience on its mobile platforms.

Ganapathy said the new disaster management model has the potential to save lives.

“It definitely would improve the quality of decisions because you not only have a lot of information, you have the right information at the right time,” she said. “This should enable commanders to improve planning, response and mitigation of disasters.”