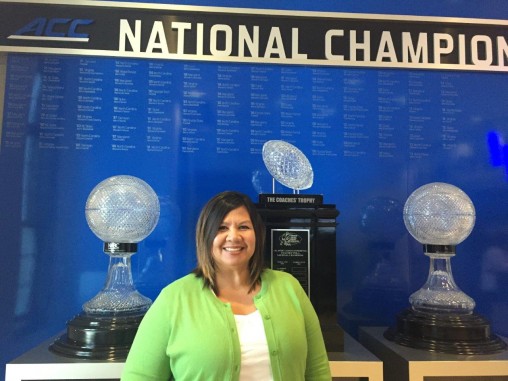 When the Wright State University Nutter Center opened in 1990, high school student Kara Tyree was on the job. In the ensuing years she would do everything from taking tickets to working as an usher to helping with parking.

It was an early education in managing sports and entertainment events. And it paid off big time.

Today, the Wright State alumna is director of men’s basketball operations for the Atlantic Coast Conference. And she runs the ACC men’s basketball tournament — one’s of the nation’s premier tournaments, featuring the likes of Duke, North Carolina and Notre Dame.

“Many people just see the five days of the tournament; we work on this tournament year-round, starting the day after last year’s tournament,” Tyree said.

Born at Wright-Patterson Medical Center, Tyree grew up in Fairborn in a military family.

She found her calling working at the Nutter Center.

“I learned the full effect of how an event was put together; that’s when I knew sports and entertainment was in my future,” she said.

Tyree enrolled at Wright State, majoring in organizational communications in the College of Liberal Arts.

“I thoroughly enjoyed the Nonverbal Communication class,” she said. “It’s amazing to learn that 93 percent of communication is nonverbal. You can really learn a lot about people by just watching them.”

While at Wright State, Tyree worked in the Athletics Department for the men’s basketball team. After graduating in 1999, she was hired as the coordinator of men’s and women’s basketball, providing administrative support for the coaching staff, organizing team travel, administering summer basketball camps and scheduling practice and shoot-around times for games.

She wanted to learn more about the arena side of the business so she accepted a position with The Lakeland Center in Lakeland, Florida, as an event coordinator. She booked and coordinated events, including Disney on Ice, trade shows and professional wrestling matches. She also served as tournament director for all NCAA and Florida high school championships held at the center.

However, Tyree missed the interaction with student-athletes and coaches, so she took a job with the University of Central Florida (UCF) as an event operations manager. She administered and coordinated all university athletics and special events, maintained the budget for the facilities, grounds and maintenance departments, scheduled the setup for UCF athletics competitions and oversaw all game operations.

She then took a job at the University of Maryland as the assistant director of the operations and facilities department, overseeing the athletic fields and competition setup for 27 teams.

“I meshed my two worlds — arena and sports — at the coliseum,” Tyree said. “It definitely kept this girl busy-busy. I did everything from coordinating to settling the events so the next show could load in.”

The tournament is now being held in different locations, so Tyree travels to and works with the venue staff in each city. The 2016 tournament will be held in Washington, D.C., followed by Brooklyn, New York, in 2017 and 2018.

“I have crossed paths with people who I met years ago and thought I’d never see again and, ‘Pow,’ they are here in North Carolina. Who knew?” she said. “Also, find the position that you want to strive for and call that person who has that position and ask them how they got there.”