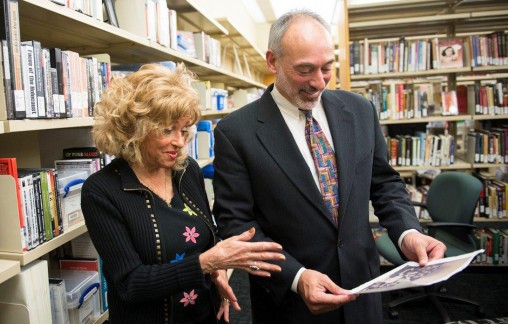 They met survivors of the Nazi death camps. They met the U.S. liberators, hardened soldiers who were ill prepared for what they would see at the camps. They met Jews who barely escaped the tightening Nazi noose in Europe, forced to leave doomed family members behind.

It’s all part of the Medicine and the Holocaust course for students at Wright State University’s Boonshoft School of Medicine. The medical students study one of the darkest chapters in human history to try to understand how physicians could ever be part of euthanasia, medical experimentation, torture and mass extermination.

“Medicine was consumed by the flames of the Holocaust, which physicians were complicit in creating,” said course director David Shuster, M.D., clinical assistant professor of orthopaedic surgery. “How could a profession dedicated to curing a patient descend the slippery slope of ethical distortion beginning with sterilization of the unfit?”

“The course is not about giving the students the answers,” said Shuster. “It is about asking students questions so they can look inside themselves for the answers.”

Last year, the students visited the Veterans Memorial Museum in Germantown, Ohio, where they met some liberators of the death camps.

The students met a Romanian who survived slave labor under the Nazis. They met a survivor who as a child was put on a kinder transport by his parents and never saw them again.

One class was held recently at the Dayton Holocaust Resource Center in Wright State’s Allyn Hall. The center stores, maintains, purchases and disseminates Holocaust educational materials for teachers and researchers in the greater Dayton area.

It was there that they heard from center founder Renate Frydman, whose fraternal grandparents and maternal grandmother were among the thousands killed in the German concentration camps in the 1940s. Her late husband, Charles, escaped from one of the deadly camps.

“Renate Frydman is a role model for doing,” Shuster told his students.

During the class, the students discussed their research into current issues that may have parallels with what was happening in Nazi Germany.

There was a discussion of a study that suggests an increase in anti-Semitic events in Europe. There was discussion of a Jewish organization petitioning French officials to change the name of a small hamlet outside of Paris from what translates in English as “Death to Jews.”

There seemed to be consensus among the students on the importance of publicly confronting wrongdoing. There was an acknowledgment that the authority of doctors gave the Nazis more power and an uneasiness at any government dictating medical decisions.

Medical student Bob Papas, of Akron, said the class has been enlightening and can bring out a whole range of emotions when the Holocaust is discussed — from sadness to shock to outrage.

“I think the biggest thing is to as a physician always be aware of ethical situations,” said Papas. “Always be cognizant of what I do as a physician impacts humans in general.”

This year’s students have a Holocaust humanity project called From Ashes to Action. The goal is for the students to use what they learn to channel their talents and passions into action that makes a positive impact on humanity.

“Create, provide a service, submit an article for publication, audition for a TED Talk, take a photograph, produce music, write a poem, discover, invent, build, start something, do something,” Shuster tells his students. “Your contribution is mandatory. The magnitude of the good you create in the world is up to you.”