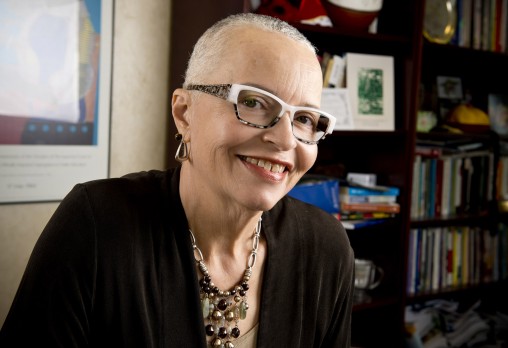 After serving as dean of the College of Education and Human Services for five years, Charlotte Harris will retire at the end of December.

When Charlotte Harris was a little girl, she earned swimming badges at Girl Scout camp and later became a lifeguard.

When Harris became dean of the College of Education and Human Services in 2010, the college was not exactly in need of rescue. But, during her time as dean, many more pools have been added. The crowds have become bigger, the interaction between swimmers more complex.

Satisfied that everyone is safe after five years on her watch, Harris will retire on Dec. 31.

“This is a very good, very robust college that has continued to grow,” Harris said. “It has been rewarding. What I’m going to miss is being able to hear things firsthand, share that information with others and work to help facilitate and make things happen.”

The scope of the college has broadened during her time as dean. Students enjoy more diverse course offerings than ever. CEHS faculty and students have become increasingly active in serving their communities, thanks to expanded partnerships with both school districts and partnering businesses.

“One thing I find interesting is that, as our college has expanded and we’ve enhanced what we do, I would say at least half of our newest initiatives are in areas other than K–12 education,” Harris said. “The names of two departments have changed to better reflect what they do. Someday, someone may want to change the name of the college to something that reflects everything we do.”

When asked to describe her leadership style, Harris smiled.

“If I need letterhead, my first instinct is to go print it myself, even if I have a student worker who is available to do exactly that,” Harris said. “I don’t see myself as a ‘micromanager.’ But to let go and delegate has to be a conscious decision for me.

“I’ve never really agreed with a hierarchical view of people and their roles. While those roles may be important, relationships and valuing everyone’s contributions have always been far more important to me.”

Organizations outside of higher education have recognized her contributions as well. She has received the Research on Women and Education Willystine Goodsell Award for service on behalf of women, girls and education and the Women of Leadership Hall of Fame Award from the Girl Scouts.

Joseph Keferl will officially become dean Jan. 1, 2016. The CEHS associate dean for academic affairs and research earned his bachelor’s and master’s degrees at Wright State and has spent 14 years as a teacher, researcher and administrator at the university.

Harris, meanwhile, will return to the water — in a sense.

“You know the pictures of the footprints in the sand on the beach?” Harris said. “I’ve always wanted to find out where those footprints go. Now I’ve got the chance to do that.”