From the stage to the director’s chair

Joe Deer, distinguished professor of musical theatre, wins the 2016 Governor's Award for the Arts in Ohio for Arts Education 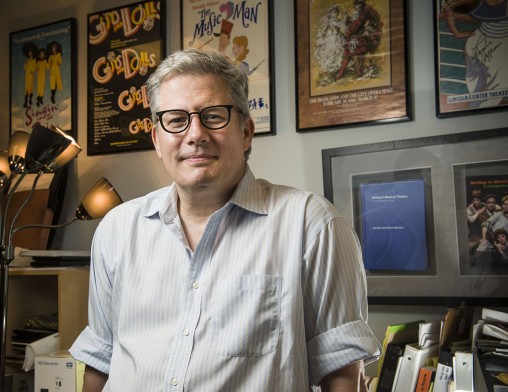 Joe Deer, distinguished professor of musical theatre, wins the 2016 Governor’s Award for the Arts in Ohio for Arts Education. (Photo by Erin Pence)

Joe Deer learned to tap dance by taking lessons from a former vaudeville dancer while wearing tennis shoes. Later, he danced for donations outside Broadway theaters, collecting tips in a casserole dish, before getting his chance to dance on stage.

He went on to perform in Broadway shows like “Anything Goes,” “The Music Man” and “Brigadoon” and toured nationally with stars like Leslie Uggams.

Eventually he caught the directing bug and has created shows not only at Wright State but also around Dayton, across the United States and overseas.

Today, Deer is distinguished professor of musical theatre at Wright State and the director of the Musical Theatre Initiative.

Deer was named a recipient of the 2016 Governor’s Award for the Arts in Ohio for Arts Education. Deer and the other award winners will be honored during a luncheon May 18 in Columbus.

Deer said he is incredibly honored to receive the award and to learn that Wright State President David R. Hopkins wrote his nominating letter. For the last 19 years, Deer said, Wright State and Dayton have been a welcoming community for him as an artist and as an educator.

“Getting this award allows me to stand for all of my colleagues in arts education, both here at the university and across the state. I am one very small part of the overall arts education effort at this university,” he said. “And, most important, this award supports our students in the arts, who are the reason we’re all here.”

The Governor’s Award for the Arts wasn’t the only honor Deer received recently. Last fall, he was inducted into the Dayton Theatre Hall of Fame.

During the 2015-16 academic year, Deer and the Musical Theatre Initiative have organized Broadway Rocks, a project that immerses students in the world of Broadway pop and rock musicals.

“There’s such energy attached to it,” Deer said. “It’s the music our students and, frankly, the faculty listen to. So it’s great when the music you identify with is part of the dramatic world you’re entering in.”

Composer, lyricist and performer Jason Robert Brown will perform at the Victoria Theatre in downtown Dayton on Feb. 25, followed by a lecture in Wright State’s Festival Playhouse on Feb. 26.

The series also included a concert and hands-on workshops by Broadway star Adam Pascal in December.

Deer grew up in Tampa, Florida, where his parents taught English and popular culture at the University of South Florida. As a kid, he watched a lot of movies, many starring Fred Astaire and Gene Kelly.

He talked his parents into allowing him to take tap dancing lessons, initially from Mars Sanderson, a family friend who danced on Broadway in the 1920s and in vaudeville. He later took lessons with Bobby Karl, another Broadway dancer who performed in the original “Mary Poppins” production.

Motivated to start his dancing career, he graduated from the University of South Florida in two and a half years and moved to New York City. His first job performing was tap dancing on the sidewalk in Shubert Alley in the Broadway theatre district.

“I did that for a while and eventually got good enough to work my way inside the theatres,” he said.

He performed on Broadway, for regional, dinner and summer stock theatres and “all the things you do when you’re trying to build a career.”

During rehearsals, Deer would pay close attention to his directors and choreographers. He became preoccupied with directing and decided he wanted to shift his career to directing and stage managing.

Deer likes to quote a professor he studied with in graduate school at Carnegie Mellon University who told him, “as a director you are the second author of the play.” Deer doesn’t consider himself a writer but says, “I love to tell stories.”

“There’s no more exciting place to be than a rehearsal studio,” he said. “If it’s good, everybody is so excited to be able to tell the story they’re working on.”

After grad school, Deer taught at the University of North Texas for a year before joining the faculty at Wright State. As soon as he walked into the Creative Arts Center for his job interview he knew he wanted to be a part of the theatre program.

“The minute I walked into this building I felt this palpable energy,” he recalled. “There was a sense of excitement, and the students were really engaged in what they were doing.”

Two years ago he took professional development leave and challenged himself to take on work he was unfamiliar with. Working with Muse Machine, he conducted dance workshops for middle and high school students across the Miami Valley and the United States. He also spent time at the Royal Central School of Speech and Drama in London, where he taught and directed “The Baker’s Wife.”

He has also directed or choreographed productions at Wright State, including this fall’s “Chicago,” for the Muse Machine, Human Race, Victoria Theatre, and regularly teaches at a number of national and international musical theatre intensives. Last summer, he directed “Mary Poppins” in Oklahoma.

He regularly uses things he learns from his professional experiences in the classroom and rehearsals at Wright State.

Although his parents were college professors, Deer never planned to teach. However, in grad school he taught classes and found he loved it. Now he says he has the perfect job.

“To be in a university atmosphere, the great thing about it is you’re surrounded by people who love the same thing you do,” he said. “My students, they love what I love, and my colleagues are all passionate about the same things I am.”