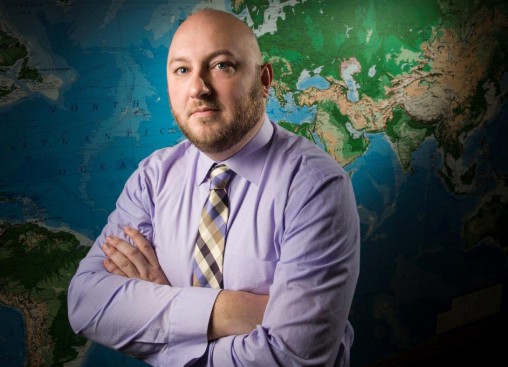 Joshua Cummins, who has degrees in history and international and comparative politics from Wright State, received first-hand lessons on the Persian Gulf nation of Qatar during a fellowship. (Photo by Erin Pence)

But the recent graduate was a bit breathless when he found himself in Qatar sitting next to the ambassador of the Persian Gulf nation, which serves as a strategic ally in America’s war on terrorism in Iraq and Afghanistan.

It was part of a briefing at Qatar’s Ministry of Foreign Affairs that Cummins — now a Middle East research assistant for the U.S. Department of Defense — received during a recent fellowship to Qatar.

“I was taking notes as fast as I could,” recalled Cummins, whose research topic for the fellowship was U.S.-Qatar relations. “I have a much better understanding of Qatar’s foreign policy, their interworkings, their goals.”

Cummins grew up in the western Ohio village of New Lebanon, graduating from Dixie High School. He fell in love with history and international relations at Wright State — interning for Congressman Mike Turner, studying abroad in Germany and Poland and competing on the Model UN team for four years.

The Wright State Model UN team has won a delegation award for 36 years in a row.

“It’s probably one of the most rewarding experiences I’ve ever had,” Cummins said. “You do all of this hard work, but you get this extreme payoff for it.”

After getting his bachelor’s degree in history, Cummins began working on his master’s in international and comparative politics, focusing on the Middle East. His interest in what triggered the 9/11 terrorist attacks led to his master’s thesis on the causes of terrorism.

As part of his thesis, Cummins analyzed public-opinion trends over 10 years. He concluded that many people become terrorists when U.S. policies such as military intervention adversely affect their lives.

Cummins obtained his master’s degree in 2012 and in 2013 landed a job as a Middle East research assistant with the Defense Institute for Security Assistance Management (DISAM) at Wright-Patterson Air Force Base, to which he occasionally commutes on his Harley-Davidson Sportster motorcycle.

The institute trains members of the U.S. military bound for overseas duties at U.S. embassies. In addition to training 40 to 60 military members at a time on the intricacies of their jobs, such as logistics and military sales, courses are offered on the history, culture, politics and religion of the region to which they are assigned.

“It’s very interesting. And it’s what I studied in school,” said Cummins, who also teaches a political science course at Sinclair Community College.

Through his work at DISAM, Cummins met the CEO of the National Council on U.S.-Arab Relations and got involved in the Model Arab League, which helps students develop skills in public speaking and diplomacy as well as learn about the politics and history of the Arab world.

Cummins then won a fellowship that resulted in a weeklong visit to Qatar in November and December. He was one of five college instructors on the trip, which included 10 students.

After flying into the Qatar capital of Doha, the group met with numerous government officials at various ministries. They also got a tour of Al Jazeera, the Doha-based, state-funded news broadcast network, and traveled to the industrial city of Ras Laffan, which is the center of Qatar’s liquid natural gas production.

“We had some amazing meetings,” Cummins said.