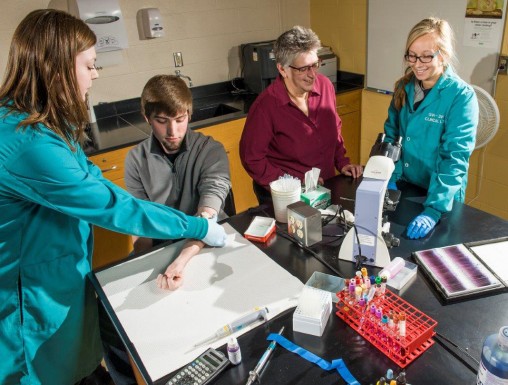 Recruiters buy them lunch. They each get job offers from multiple employers. Salaries start at $50,000 a year.

Such are the travails of graduates of Wright State University’s Clinical Laboratory Sciences program.

“There is so much need right now,” said Director Tammy Bash. “It’s a great time to be in this program. And we’re the only game in town.”

Wright State’s Clinical Laboratory Sciences program was launched in the 1980s after local hospitals closed their training programs because of an oversupply of medical technicians. And when the University of Dayton terminated its program, Wright State became the lone producer of clinical laboratory scientists in the region.

Bash said there is currently a great demand for clinical laboratory scientists because many are retiring or on the verge of retirement. And a shortage is being predicted for as much as seven more years.

“There’s nobody in the gap, and it’s just going to get worse,” said Bash. “Last month, we had contacts from three health units asking to meet with our students to talk with them about jobs.”

The program accepts 14 students a year from a field of twice as many applicants, some of whom hail from other states and countries. Students either obtain a bachelor’s degree in clinical laboratory science or a certificate they can couple with a different undergraduate degree. Students from Miami University and Ohio University are among graduates.

The students study hematology, clinical chemistry, microbiology and immunohematology. They go through a summer session of lectures and labs and then work at local hospitals four days a week.

Bash said the university’s production of clinical laboratory scientists is limited by the number of hospital training slots.

“The toughest part for me as director is to figure out how to grow the program,” she said.

Graduates typically find jobs in laboratories at hospitals, doctor’s offices or research institutions. They are highly trained in quality control and taught to be extremely thorough.

“Everyone I talk to in the state says our students are the best because they come in ready to work,” said Bash. “Most folks who have worked with clinical laboratory lab graduates know the advantage of having one.”

The students are high academic achievers (average GPA is 3.2), team players, excel in laboratory settings and are active as opposed to sedentary learners.

Student Shon Jergens, of Lexington, Ohio, was introduced to clinical laboratory science in high school during a visit to Wright State. He said a majority of medical decisions are based on lab work.

“Knowing that we’re playing a really important role in patient care is important,” he said. “It’s satisfying even though we’re behind the scenes.”

Student Carly Simmons, of Dayton, was a nursing major for two years and in the process of switching to biology when she discovered the laboratory science program through her adviser.

“I love everything to do with science,” she said. “Even though it’s behind the scenes, I’m still very deep into the health care part of it, just not on the patient-contact side.”

The Wright State program has had some high-profile success.

Scott Cunningham, who got his clinical laboratory science degree from Wright State in 2001, is research and development technologist at the Mayo Clinic. Based in Rochester, Minnesota, the Mayo Clinic is widely regarded as one of the world’s greatest hospitals

Cunningham won the 2014 Scherago-Rubin Award, which honors an exceptional, bench-level microbiologist. He is also an instructor in laboratory medicine at the Mayo Clinic College of Medicine and has given presentations on molecular testing and mass spectrometry applications in the clinical laboratory at national meetings.

Bash said one of the major strengths of Wright State’s program is its community outreach.

“We directly take our students and put them out in the community to save lives,” she said. “How cool is that? It’s pretty special.”