The moment you step into the Boston Stoker warehouse, it hugs you like a warm blanket – the rich aroma of roasting coffee beans.

“This is where the magic happens,” says J. Stanton, a Wright State alumnus who is Boston Stoker’s director of sales and marketing. “We are a globally sourced coffee roaster. What we’re trying to do is produce the finest roast.”

Boston Stoker opened for business in 1973 and is a founding member of the Specialty Coffee Association of America. It began as a pipe and tobacco store, named after the “stoking” of a pipe. As a boy, Stanton and his family would occasionally go to the Boston Stoker in Fairborn.

“It was a special treat to get Boston Stoker,” he recalled.

Today, the Dayton company operates six coffee shops in the Dayton area and one in Columbus. It employs about 80 workers, 12 of them at its roasting warehouse in Vandalia. 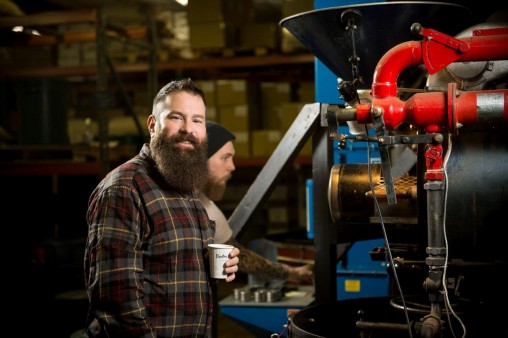 J. Stanton ’94 at the Boston Stoker warehouse in Vandalia, Ohio. (Photos by Will Jones)

In addition, Boston Stoker has established a fund with the Wright State University Foundation to enable Wright State business students managing the cafe the opportunity to travel internationally to learn the coffee industry business at coffee farms in Costa Rica and other coffee-producing countries.

“It’s an astounding experience,” said Stanton, who himself has put in a few hours as a visiting worker at Hacienda La Minita in Costa Rica. “Today, it is one of the finest coffee estates in the world. You get a sense of what developing countries do to produce a product for a world market.”

Boston Stoker forged a relationship with Hacienda La Minita in 1979 after the owner of the Costa Rican farm shipped his coffee beans to Boston, picked them up in a van, and began peddling them around the United States. Today, Boston Stoker has similar trade agreements with coffee producers in other Central American, South American and African countries. 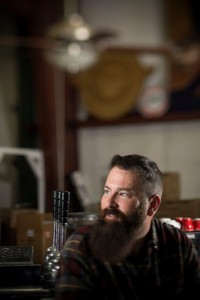 J. Stanton majored in communication studies at Wright State. Now he is the director of sales and marketing for Boston Stoker.

Resting on wooden pallets inside the warehouse are massive burlap bags of coffee beans from tropical countries around the globe – Kenya Jungle, Brazil Monte Christo, El Salvador Santa Emilia and Ethiopia Konga. The air is filled with the hiss of beans being vacuumed into the roaster, after which they are sealed in blue plastic bags and shipped within 24 hours to Boston Stoker coffee shops.

In a nearby “cupping” room, the coffee is tasted for boldness, acidity, body and finish. A coffee bar in the warehouse used to train Boston Stoker baristas boasts a gleaming silver espresso machine with a gold crest.

The 47-year-old Stanton, a whirling dervish with an infectious enthusiasm, landed at Boston Stoker in a most roundabout way. There were previous stints at United Airlines, Quiznos and Hot Head Burritos. But that just scratches the surface of what has been a most interesting life.

Stanton grew up between Fairborn and Yellow Springs. His mother was a dental hygienist who co-founded the dental hygiene program at Sinclair Community College. His father had a bachelor’s degree in fine arts from the University of Notre Dame and did illustrations for the Department of Defense. Both parents were private pilots.

“I actually learned to fly a plane before I learned to drive a car,” Stanton said.

Stanton was a precocious and energetic child. He started playing the piano when he was 4 years old and today is a professional pianist who for years has played for shoppers at Nordstrom and Von Maur.

After graduating from Fairborn High School in 1987, Stanton enrolled at Wright State, but left after a quarter to take a job as a district decorator with the Sherwin-Williams Co. He returned to Wright State a year later. 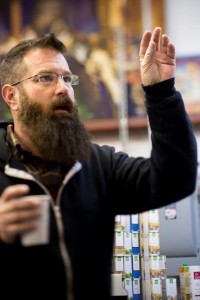 Stanton credits Wright State for giving him, a young student with unconventional ideas and approaches, the tools to spread his wings.

In 1990, Stanton – as a student – was appointed university ombudsman by President Paige Mulholland and would serve as ombudsman for four years. Stanton had an ability to connect with students, faculty and staff and a sincerity in helping them solve bureaucracy problems.

Stanton got his bachelor’s degree in 1994, majoring in communication studies with an emphasis on dispute resolution and conflict analysis. He continued to operate his business, called South Paw Creation & Design. Then his career journey became a bit of a blur.

He moved to Denver for a job with United Airlines as an international flight attendant for three years. Then there were jobs in Denver with Janus Mutual Funds; Quisnos, where he opened the company’s international franchises; Nordstrom, as lead pianist; and Aveda, as a store manager.

In 2002, Stanton returned to Dayton to care for his ailing father. He started South Paw up again and had a hand in designing several Dayton restaurants as well as serving as a guest designer on an Extreme Makeover home in Beavercreek. He then worked for Country Club of the North as director of residential sales and brand manager and for Hot Head Burritos as director of integrated communications before joining Boston Stoker in 2014.

Stanton credits Wright State with giving a young student with unconventional ideas and approaches the tools to spread his wings.

“They allowed me to make a square hole for my square peg,” he said. “There were opportunities to advance myself professionally before I graduated. I was meeting with the president every month. How fantastic is that for a student?”

“I’ve been doing it for eight years now, and we have collected over 150 instruments,” he said. “It’s my favorite thing ever.”

Stanton’s philanthropic streak fits in with his Boston Stoker job. He and three other employees are going to Honduras at the end of February to build a house with Heart to Honduras, a Xenia-based organization that feeds, clothes and shelters the needy.

“Boston Stoker is so giving,” Stanton said. “That’s part of our philosophy – giving back.”