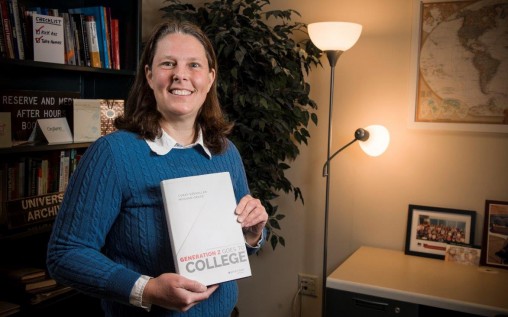 The outcome of the presidential election could hinge on Generation Z, who have surprising solidarity in views on education, employment, personal freedoms and military intervention, according to a Wright State University scholar who has done an extensive study of the group.

“Because they will vote in their first presidential election in November, their perspectives will have an opportunity to fundamentally shape the political landscape, “ said Corey Seemiller, assistant professor of organizational leadership. “Who Generation Z is and what they care about should be of paramount importance to the candidates.”

Seemiller, along with co-author Meghan Grace, has written “Generation Z Goes to College.” The book was based on the results of surveys of thousands of Generation Z college students.

Gen Zers believe that the quality of education is declining, access to a good education is limited to certain populations, and the K-12 system is failing kids.

“Because they are insiders in our education system, they have a vantage point that political candidates couldn’t possibly experience for themselves,” Seemiller said.

More than 80 percent of Gen Z college students are concerned about the rising cost of college tuition. They overwhelmingly believe that higher education is becoming financially out of reach even for middle-income families. Some even question the benefits of getting a college degree when considering the debt they would accumulate in doing so.

“Given their concerns around access and quality of education, we can likely expect that they would support enhanced funding for K-12, increased access to quality educational experiences for all youth and tuition-free higher education,” Seemiller said.

As children, many Gen Zers watched hard-working and talented people around them get laid off. They know that getting and keeping a job is not a guarantee. However, getting a job, even one that pays well, is not the American Dream for them. They want a vocation that will enable them to change the world for the better.

“And given their desire to work for themselves someday, they would likely support initiatives that help people start and run small businesses,” Seemiller said.

Gen Zers recognize the growing gap between the haves and have nots, and are immensely troubled by poverty. They will likely support balancing the budget, reducing the deficit, while still ensuring funding for education, providing social programs and increasing access to affordable health care.

“They’ve watched the government shut down; they’ve watched dysfunctional politics,” she said. “They think they’re going to change the world, and they really don’t have any interest in running for office themselves.”

However, she said many older members of Generation Z love to do political fundraising. Some of them were even in high school when they began raising money for candidates.

“They love it because they can create a Go Fund Me page online, do viral fundraising,” she said. “They might not be able to mobilize their friends to go vote, but they can get them to pitch in $5. If the candidates want to use that momentum, they should be getting some young staffers on board who can do some of this really creative fundraising.”

“Although they recognize that there is much to fear, we found that more than half of Gen Zers believe the U.S. is involved in too many global conflicts and that the financial and human costs are too much to bear in trying to be the world’s police,” Seemiller said. “The reality is that using words and phrases like ‘bombing,’ ‘boots on the ground,’ ‘air strikes,’ ‘wipe out’ and ‘eradicate’ when referring to issues in the Middle East will likely turn off many members of Generation Z.”

Most Gen Zers lean left on social issues, and they want to see more equality for people, she said. They want politicians to remove laws that restrict some groups from receiving equal access, as well as support laws that protect underrepresented groups.

One of their largest social concerns of Generation Z is racism.

“Many have expressed astonishment as to why there are obstacles and barriers to racial equality that still exist today,” Seemiller said. “A word of advice for candidates: Stop the racist rhetoric. This is a surefire way to get Generation Z to write off your candidacy.”

“The more candidates point out their lack of support for LGBT issues, the more they potentially isolate themselves from a majority of this niche of the electorate,” said Seemiller.

More than 75 percent of Gen Zers want to curb what they see as government overreach and limits on personal freedom. They may advocate for gun ownership while at the same time support workplace protections for transgender employees.

“Gen Zers want candidates who can balance government regulation to ensure individual freedom, but not at the expense of limiting the freedom of others,” she said.

Gen Zers as a whole are not really interested in issues related to immigration even though they favor increasing access and expanding citizenship opportunities. They are frustrated at the inaction of politicians on the issue.

“We postulate that it’s because there is already a lot of stuff happening on that,” Seemiller said. “It’s not a new and emerging issue. They’re concerned about things that feel stuck.”

Surprisingly, legalizing marijuana is a concern for only very few Gen Zers.

“So where a candidate stands on this issue will likely not be a deal-breaker,” Seemiller said.

“The reality, though, is that they will likely be socially left-leaning Independents who vote simply for the issues, not the parties,” she said.