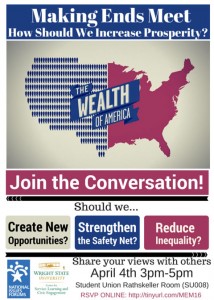 The importance of spreading prosperity throughout society will be the topic of a National Issues Forum held at Wright State University designed to effect change in federal policy and the community.

The Monday, April 4, forum, titled “Making Ends Meet,” will be held from 3 to 5 p.m. at the Rathskeller in the Student Union.

It is sponsored by Wright State’s Center for Service Learning and Civic Engagement.

National Issues Forums are nationwide, nonpartisan discussions organized by civic, educational and other organizations and individuals whose mission is to promote public deliberation in America.

“Deliberation is sharing your views about an issue and listening to other viewpoints on the issue,” said Jack Dustin, interim director of the center. “In an era of intense partisanship and disagreement, it is imperative that we find ways to come together as a diverse community to talk about real issues.”

Everyone attending the forum is invited to participate in the conversation.

Dustin said the forum is designed to challenge participants’ preconceptions and forces them to think critically about their values and perspectives. He said it will help students and community members learn to speak and listen to others with different opinions and perspectives, an invaluable skill.

Following the forum, participants will be asked to complete a survey taken to measure their beliefs and attitudes with regard to how to increase economic prosperity in the community. Results of the survey will be combined with survey results from other forums around the country by the Kettering Foundation and then submitted to government officials in Washington, D.C., on May 5.