Hopkins spoke to more than 400 business and community leaders at Sinclair Community College on April 5 during the Dayton Area Chamber of Commerce’s 2016 Annual Meeting. The regional business trade association has 2,700 members.

Wright State is hosting the first presidential debate, on Sept. 26. The debate is expected to be in the national and international spotlight and attract thousands of media members. 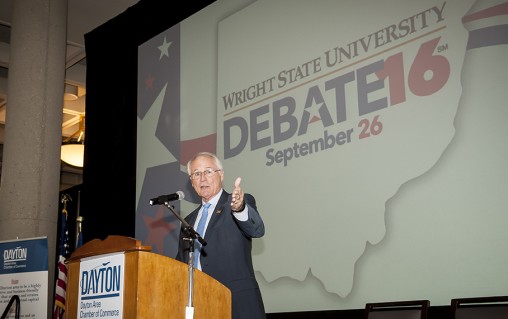 During the Dayton Area Chamber of Commerce’s 2016 Annual Meeting, Wright State University President David R. Hopkins gave an update about the presidential debate Wright State will host on Sept. 26. (Photos by Will Jones)

Hopkins discussed why Wright State sought to host the debate, how the university landed it, what it means for the Dayton region and how the community can get involved.

Hopkins said he believes a key factor in Wright State winning the right to host the debate came last May when representatives of the Commission on Presidential Debates paid the university a courtesy visit as part of the site-selection process.

“They were blown away by the community support they saw here in the Dayton region,” he said.

When Hopkins described the phone call from the commission telling him that Wright State had been selected to host the first debate, the chamber audience erupted in applause.

“This is a moment in our history that is unprecedented,” Hopkins said. “It’s unprecedented what we can do with this opportunity.”

Phil Parker, president and CEO of the chamber, said early estimates put the economic impact of the debate as high as $30 million. 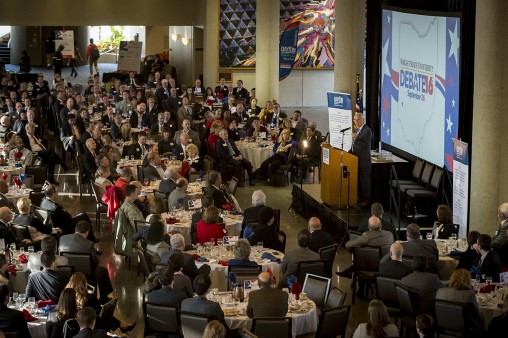 “We’re happy to be the catalyst for bringing this here, but we’re bringing it for you. This is not just about Wright State University,” Hopkins said. “We’re bringing it because we want this to be an opportunity for your organization, for us to really leverage this so you prosper.”