As the Wright State University Nutter Center celebrates 25 years of operation, Executive Director Jim Brown needs only one word to describe the facility’s impact on the region—“huge.”

“What is the Nutter Center? We’re everything,” Brown says.

For the past quarter century, the Nutter Center has served as a stage for spectacular concerts, shows, and political events. But it also stands on Wright State’s front porch and has become a beacon and ambassador for the university.

“We are a key component of the university; we are Wright State,” said Brown. “Part of our mission is to be involved in the community. And I think we do a good job of helping with economic growth.”

The $34 million, university-owned Nutter Center—an 11,000-seat sports and entertainment complex—opened December 15, 1990, with a show by the Boston Pops Esplanade Orchestra.

It has since become an economic engine for the region, putting money into the pockets of hotels, shops, and restaurants.

In 2013, the Nutter Center was third in the nation in attendance and gross sales for medium-sized venues at colleges and universities, according to Venues Today magazine.

When the Nutter Center hosted the Winter Guard World Championships, the Air Force Marathon Expo, and the Jehovah’s Witnesses’ district convention a few years ago, those three events alone had a $42 million economic impact to the region.

The Nutter Center takes its name from the late Ervin J. Nutter, a Beavercreek industrialist and university trustee who donated more than $1.5 million for its construction.

The first rock concert at the Nutter Center was held January 10, 1991, and featured ZZ Top with the Black Crowes. Over the years, the Nutter Center has played host to such top performers as Frank Sinatra, Elton John, Paul Simon, Tina Turner, Garth Brooks, Cher, and Jay-Z.

The Eagles concert in July had gross sales of $1.3 million, the most the Nutter Center has ever had. Other popular events included concerts by Florida-Georgia Line and the Trans-Siberian Orchestra, as well as regular appearances by the Harlem Globetrotters and Disney on Ice.

Over the years, the Nutter Center has been home to soccer, hockey, and indoor football teams. 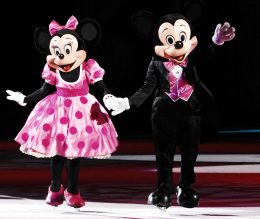 “It’s a tremendous opportunity not only for Wright State, but for the community, the region, the state,” said Brown. “The presidential debate is going to impact the world; it is a world event. The economic impact from that will be huge.”

For 18 years, Jehovah’s Witnesses from Ohio, Indiana, and Kentucky came to the Nutter Center for their annual district convention. They filled the arena on Friday, Saturday, and Sunday over four weekends. In 2012, for example, the convention drew an estimated 30,000 people and pumped $14.1 million into the local economy.

The Winter Guard World Championships are usually held at the Nutter Center for two weekends each year, drawing an estimated 2,000 people from as far away as California.

The Nutter Center also enjoys spinoff from the annual Air Force Marathon, hosting both a 5K run and the Sport and Fitness Expo featuring scores of exhibitors displaying the latest developments in sports, fitness, and nutrition. The marathon and related races attract more than 35,000 runners and supporters from around the world and make a $14 million splash in the local economy.

Brown said the 5K and expo demonstrate Wright State’s involvement with the military and help recruit both traditional and non-traditional students by introducing people with a wide range of ages, backgrounds, and hometowns to the campus.

Some of the events at the Nutter Center, such as the Military Vehicle Preservation Society Conference and the Pontiac GTO Convention, last for days.

For the public announcement of Wright State’s $150 million Rise. Shine. fundraising campaign in 2014, the arena floor of the Nutter Center was transformed into a dazzling landscape that included a glittering chandelier and a kaleidoscope of towering video screens, one of which featured a message from Hollywood superstar Tom Hanks.

The Nutter Center also hosts academic events such as Science Olympiad, as well as robot, trebuchet, and Lego competitions.

“That’s outreach for prospective students,” said Brown. “Any time we can help the university, colleges, and departments bring in potential students, that’s an awesome thing.” 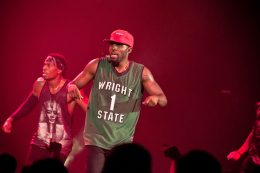 In addition, the Nutter Center plays host to more than a dozen high school graduations annually, showcasing the university to potential students and delivering celebrants to local hotels and restaurants.

“Try to go to a restaurant after graduation sometime,” Brown said. “The folks over at Bob Evans get on my case sometimes, telling me, ‘Man, you’ve got to let us know ahead of time.’ ”

Brown, who was hired as associate director in 1999, works days, nights, weekends, holidays—sometimes up to 60 hours a week. There have been times when he has worked from 7 a.m. one day until 1 a.m. the next.

The Nutter Center operators are very community minded. They work with promoters on certain events to have some of the proceeds from ticket sales help local charities for everything from children’s hospitals to cancer victims.

The Bob Seger, Jason Aldean, Rascal Flatts, and Zac Brown bands have all autographed guitars that were donated as part of the Nutter Center’s charitable work. On one particular day, two guitars signed by country music star Darius Rucker and destined for charities were leaning up against one of Brown’s office cabinets.

Even with all of the concerts, shows, graduations, and athletic competitions at the Nutter Center, there is room for more. For example, the facility is getting a lot more inquiries about hosting large banquets—of 600 to 700 people.