At a vacant factory in a struggling East Dayton neighborhood, there is new life. A lot of it. Germination to be exact — seedlings of collard greens, arugula, cabbage, Swiss chard, sprouts, broccoli, spinach and other vegetables muscling their way out of worm-enriched soil.

The site has become a petri dish for the idea of growing food in the heart of a big city.

At The Urban Renewal Farm, or TURF, volunteers who include many with Wright State University connections build raised garden beds with scrap wood, make planters out of old plastic barrels, mix and shovel soil enriched with manure and worm waste, and plant seedlings that will produce a harvest in the summer and fall. 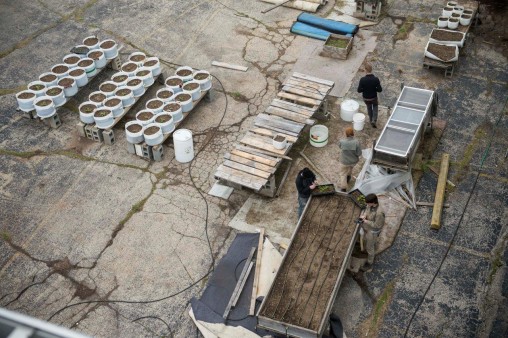 Volunteers turned a vacant factory in a struggling East Dayton neighborhood into a green urban community farm. (Photos by Will Jones)

Alex Klug, a horticulturalist at The Foodbank in Dayton and president of TURF, said the organizers and volunteers are “super ambitious.”

“We want to promote agriculture and community-based learning and hands-on skills — carpentry, growing food in a sustainable way, trying to reduce waste — all at one center,” said Klug, who is interested in starting a tool-lending library at the factory.

The three-story, 215,000-square-foot factory was constructed in 1915 by a company that made label guns. During World War II, ammunition was manufactured there for the war effort. Most recently glass for automobiles was made at the site, which finally ceased operating in 2008.

The factory itself has seen better days. Some of the windows are broken, and the floors are carpeted with chips from peeling paint. But there is a lot of space, natural light and potential.

Reilly Dixon, who earned his bachelor’s degree in English from Wright State in 2014 and will begin working on his master’s in the fall, has volunteered at The Urban Renewal Farm for about a year.

Dixon said the mission of the farm is both to help revitalize the community and to give residents a nearby source of healthy produce. 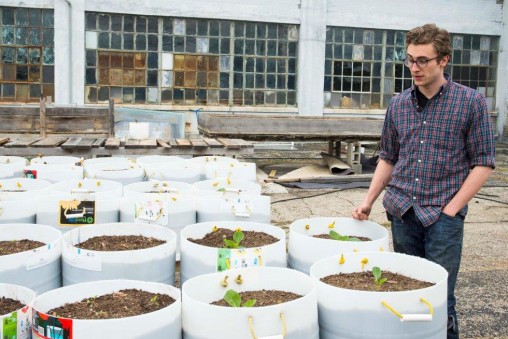 Reilly Dixon, a 2014 Wright State graduate, has volunteered at The Urban Renewal Farm for about a year.

“The goal is to engage the community in an ecologically conscious way that involves taking control of their food from start to finish — how to grow it, how to maintain it, how to eat it in a food desert,” he said. “It just seems like it’s easier to get a hamburger than a nice salad around here.”

The farm is the brainchild of Riverside native Jim Wellman and inspired by The Plant, an urban farm located at an old meat-packing warehouse in Chicago. The Plant’s mission is to develop circular economies of food production, energy conservation and material reuse while empowering people of all backgrounds to make their cities healthier and more efficient.

The seeds at TURF are first germinated in a boiler room near the factory because it is warm and moist, perfect for plant growth. Volunteers fill the raised beds and makeshift planters with soil, which is a mix of dirt, horse manure and earthworm waste. The farm has a compost operation and raises its own worms.

“The worm waste gives us really beautiful, rich, thick soil that we mix in with the dirt,” said Dixon. “Stuff just grows like gangbusters out of it.”

“There is a lot that we need to do still, but come summertime we’re going to have so much greenery around here,” said Dixon.

The volunteers are also establishing a bee colony and will be planting wildflowers and flowering produce to supply the insects with pollen and nectar. Workers plan to install a honey super, a box with frames used to collect honey from the hive.

Produce grown at the farm will be sold at local farmers markets and donated to Welcome Dayton, an initiative that promotes immigrant integration into the greater Dayton region. Last year, the farm supplied produce to several local restaurants.

“We have 400 peppers we’re in the process of growing right now for a women’s Sriracha business,” said Dixon. 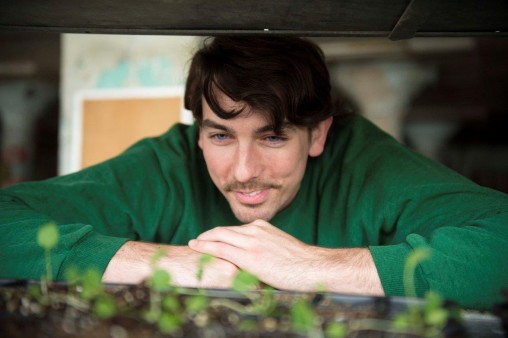 Volunteer Graham King, who graduated from Wright State in 2015, looks at seedlings.

About 10 volunteers work at the farm on any given weekday and up to two dozen on the weekends. Of those, about 10 have Wright State connections.

“We’re trying to get as many people involved as possible,” said Dixon. “This is a gargantuan project, and we need all hands on deck.”

Volunteer Graham King graduated from Wright State in May 2015 with a bachelor’s degree in international studies and Spanish. Because of his field of study, he worked with farmers in Ecuador.

“That definitely piqued my interest and made me realize I really love this kind of work, the tangible difference it makes,” he said. “You can just see it happen.”

Volunteer Benjamin Virnston majors in biology and English at Wright State. He specializes in plant biology and works at a campus greenhouse. 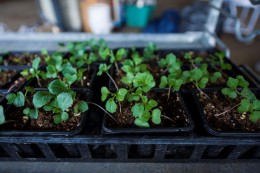 “I fell in love with the idea of this project,” he said. “We planted the seeds.”

Dixon’s interest in food and agriculture has intensified in recent years. In 2013, he worked on a spinach farm in Moab, Utah, and a beet farm in California. He later went to Maine and worked at an orchard and winery, where he also helped raise sheep and honeybees.

“Food is just one of those universal, ubiquitous things that brings people together,” he said. “I guess I caught the bug and wanted to bring it back to Dayton.”

Dixon usually volunteers three to four days a week, from mid-morning to late afternoon. He said volunteers are needed who are good with plants, construction, business, marketing and art.

“Getting people involved is kind of difficult, but once you see this place you automatically fall in love,” he said. “It’s hard not to get swept up in the optimism, the possibilities.”