When high school sophomore Kallyn Buckenmyer clenched her fist, the hand of visiting Wright State University professor Christopher Wyatt began to twitch. It was an eye-opening lesson in neuroscience aided by electrodes and wires that connected the two.

“It was really strange because I didn’t feel anything, but I saw how it bent Dr. Wyatt’s fingers,” said Buckenmyer. “It was different to know that I could control someone else’s motions by having the electricity amplify it. It was really creepy, but it was really interesting and very cool, and I liked that. And I’d like to learn more about that.”

The scene was an anatomy and physiology class at Yellow Springs High School. And the lesson was part of a neuroscience outreach effort by Wyatt and Patrick Sonner, faculty members from Wright State’s Department of Neuroscience, Cell Biology and Physiology. 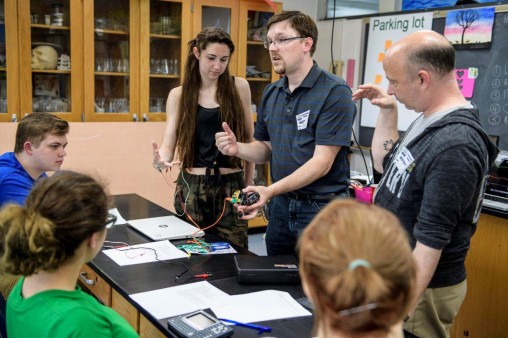 Wright State is developing an undergraduate neuroscience major, so Sonner and Wyatt have been promoting neuroscience education in the community.

Neuroscience is an interdisciplinary field of study, encompassing topics such as math, physics, chemistry and biology and bringing them all together.

“It’s important for students to understand where those other fields apply,” said Sonner. “We’re starting to do some outreach to promote and introduce that.”

Sonner first showed the 25 high school students a short video of a boy stubbing his toe in order to explain conduction velocity. Then students gathered around to observe a neuroscience demonstration with an earthworm. Later, there were lessons on action potentials, electrical circuits, voltage and myelination.

Sonner told the students it is important to understand conduction velocity and how neurons convey a signal. Multiple sclerosis, for example, is a disease in which demyelination — damage to nerve fibers’ protective covering — occurs, which results in a slowdown or loss of conduction velocity.

“Neuroscience is a challenging topic,” said Sonner. “In many ways we are skimming over a lot of the details and trying to hit the highlights to make it understandable for students in early level anatomy and physiology.”

Many of the students appeared engaged and interested in the lesson despite a challenging bit of math.

“We try to make it interesting and relevant and try to promote the idea that math is important and applicable to a lot of things,” Sonner said.

Neuroscience is a hot topic these days.

In 2013, President Obama launched the Brain Research through Advancing Innovative Neurotechnologies (BRAIN) Initiative. The effort is aimed at accelerating the development of technologies to produce a new understanding of the brain and how cells and neural circuits interact.

Sonner said a tremendous amount of people will develop a neural disease in their lifetimes, including Parkinson’s disease, Alzheimer’s disease and Lou Gehrig’s disease, all of which have no cure.

“We have to understand how the system works under normal conditions and then we can start to apply treatment approaches to what happens to the nervous system under disease or injury conditions,” he said.

He hopes some neuroscientists of the future were sitting in that Yellow Springs High School class.

“It was really interesting seeing how space and time connect with how the brain works and makes your body work,” said Buckenmyer. “I didn’t know it was all connected as much as it was.”

The crowd-pleasing moment came when Sonner attached electrodes to Buckenmyer’s ulnar nerve on her inner arm and two in the same place on Wyatt. The electrical circuit was then amplified by a Transcutaneous Electrical Nerve Stimulation (TENS) machine, which is used in therapy to block pain.