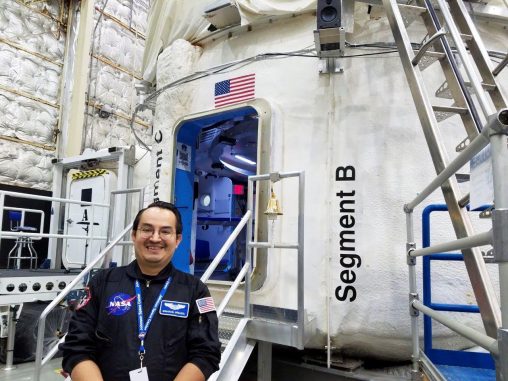 Emmanuel Urquieta, who obtained his master’s degree in aerospace medicine from the Wright State Boonshoft School of Medicine in 2015, will spend the next month in a simulated spacecraft at the Johnson Space Center in Houston. (Contributed photo)

A four-person crew simulating the isolation and stresses of deep space travel for NASA includes Wright State alumnus Emmanuel Urquieta, a physician who got his degree from the university in aerospace medicine.

The crew is made up of Urquieta, two other men and one woman selected from a screening pool. The crew members began training in late June for their simulated mission, which runs from July 11 to Aug. 10.

“This opportunity is one of my childhood dreams come true — being part of an official NASA mission, training at the Johnson Space Center and being able to help to better understand the biomedical and psychological challenges of confinement and long-term space missions,” said Urquieta.

The HERA module is being used by NASA’s Human Research Program to investigate ways to help the agency move from lower Earth orbit to deep space explorations. The crew goes through the procedures of a real deep space mission without ever leaving the building. 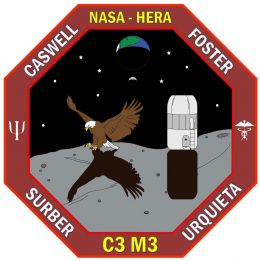 The module provides a high-fidelity research space for scientists to assess risks and gaps associated with human performance during space exploration by simulating isolation, confinement and remote conditions.

Researchers outside of the module will collect data on team dynamics, conflict resolution and the effects of extended isolation and confinement. Studies may focus on behavioral health and performance, communication and autonomy, human factors and medical capabilities during exploration.

The crew will test hardware prototypes before they are used in off-Earth missions. They will also conduct experiments involving plants and brine shrimp and create a piece of equipment with a 3-D printer.

After their fictional visit to Geographos 1620, a Mars-crossing asteroid, the crew will simulate the processing of soil and rocks they collected virtually.

Urquieta obtained his master’s degree in aerospace medicine from the Wright State Boonshoft School of Medicine in 2015.

He was an adjunct faculty member in Wright State’s Department of Modern Languages last spring before moving to Houston.