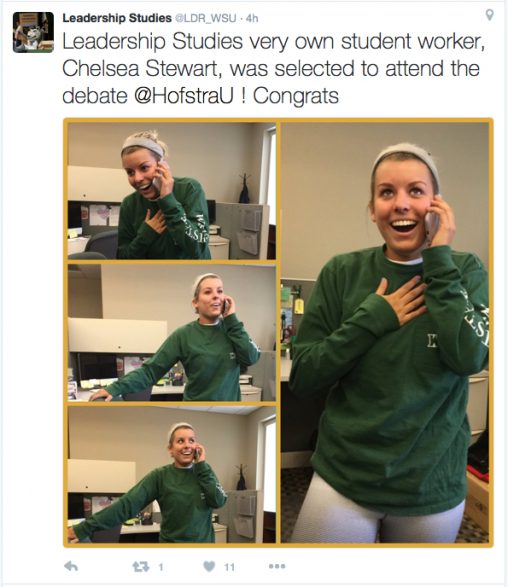 The Department of Leadership Studies shared on its Twitter feed Chelsea Stewart’s reaction when she learned she could attend the presidential debate in New York.

When Wright State University nursing student Chelsea Stewart got the phone call that she was selected to attend the first presidential debate in New York, she couldn’t contain her excitement and jumped right out of her chair.

She is a student worker in the Department of Leadership Studies and just happened to be sitting next to the person in charge of the department’s social media, who captured the priceless moment on camera and posted it.

“Are you serious,” said Stewart. “I didn’t think it was real. I was just so shocked and excited.”

She was doubly excited because she has never been to New York. “This is a once-in-a-lifetime opportunity,” she added.

Fifteen Wright State students will get the experience of a lifetime when they travel to Hofstra University in Hempstead, New York, to sit in the audience of the first presidential debate and see democracy in action up close.

When Wright State decided not to host the Sept. 26 presidential debate due to security concerns and mounting costs, the event moved to Hofstra, the alternate site. Hofstra President Stuart Rabinowitz was quick to contact Wright State President David R. Hopkins and offer the tickets to help ease the disappointment.

The group of lucky students is representative of the rich diversity of which Wright State is known. Making the trip will be undergraduate, graduate, doctoral and professional students, including traditional and nontraditional students from age 19 to over 50. Nearly all of Wright State’s colleges are represented, as well as former military and an international student.

From education and health care to economics and government spending, the students are eager to hear the candidates’ views on topics most important to them personally and professionally.

“As a medical student, I want to hear what they have to say about health care since it’s going to impact not just the community, but also my fellow students,” said Christina Borchers, a student in the Boonshoft School of Medicine. “I think everyone deserves the right to have access to care. It’s a complex issue on how to make that affordable and possible, so I’m curious to hear what both sides have to say.”

But the Oakwood native has another reason to look forward to the trip to Hofstra. It is only an hour’s drive from New York University, where she earned her undergraduate degree.

“I actually have friends who went to school at Hofstra,” she said. “It will be neat to go back there; I miss it a lot. I feel like I won the lottery.”

She is a second-generation medical student, the daughter of Samia Borchers, M.D., who graduated in the Boonshoft School of Medicine’s first class.

Sophomore Eric Whitt, who is studying electrical engineering, is looking forward to being in the actual debate hall with the candidates. “I’m going to get to experience the debate firsthand so I can actually get the vibe and the full picture, instead of just the parts you see on television,” he said.

Government spending and education are important topics for Whitt, a military veteran. “I want to know which candidate is going to be better for the middle class,” he said. “I feel like the middle class is really having a hard time, especially over the last 25 or 30 years.”

He added that he appreciates the opportunity and expressed thanks to those planning the trip and the donors who are covering hotel, food and airline expenses.

Donna Schlagheck, retired chair of the Department of Political Science who helped Wright State secure the debate, will accompany the students to New York. As faculty adviser to Wright State’s Model UN team for many years, she is uniquely qualified to ensure the students get the most out of this exceptional opportunity. Debbie Kimpton, director of executive office operations, is also helping plan the experience and will escort the group.

“I’m thrilled beyond belief,” exclaimed Laura Poole, who is majoring in studio art with a minor in French. “I’ve loved politics since I was a kid in high school. We watched both conventions, and we follow all this very, very closely.”

Following a career as a practicing psychologist in the U.S. Air Force and civil service, Poole is now pursuing her passion at Wright State through the Post 9-11 GI Bill. She even participated in a study abroad program in Paris earlier this summer through the University Center for International Education’s ambassador program. Proud to be a student veteran, she is also active with the Veteran and Military Center on campus.

Although Poole was disappointed when Wright State pulled out of the debate, she said she respects Hopkins’ decision.

The students going to the debate are: