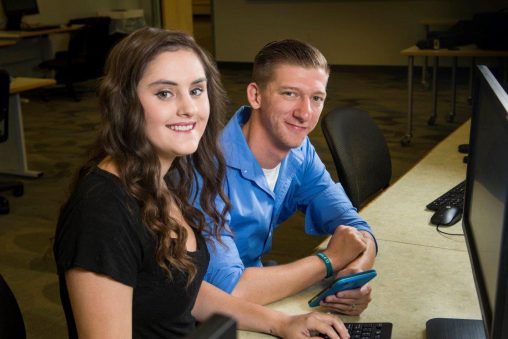 Recipients of LexisNexis Election 2016 Scholarships, Wright State students Courtney Resnicky and Brandon Teeple will will write blog posts offering their insights into the presidential election from a Millennial viewpoint. (Photo by Will Jones)

The Millennials — they could very well hold the key to the outcome of the U.S. presidential election in November. And interest in getting their take on the issues and the political landscape is high.

As part of that, Wright State University students Courtney Resnicky and Brandon Teeple have been awarded LexisNexis Election 2016 Scholarships. The two Millennials will use the company’s fact-finding and media-monitoring databases to write blog posts offering their insights into the presidential election from a Millennial viewpoint — from the issues being discussed on campus to the role Ohio may play in the election.

“It sounded like something that was really interesting to me and I would really enjoy doing,” said Resnicky, a senior majoring in English with a concentration in technical writing. “I read about politics across many different platforms to get information from everywhere. Having LexisNexis open their database to us is going to be wonderful because we will be able to look at articles from everywhere.”

LexisNexis is a leading global provider of computer-assisted legal and business research as well as risk management services. During the 1970s, the company pioneered the electronic accessibility of legal and journalistic documents. It serves customers in over 175 countries and has more than 10,000 employees worldwide.

Resnicky and Teeple will write nonpartisan blog posts about the presidential political campaign for LexisNexis through the lens of Millennials, using the company’s database to support their analysis. Themes will include how they think the election will affect Millennials and the Millennial impact on the election and the campaigns. The posts will be owned by LexisNexis, posted on the company’s Biz Blog.

The Millennial Generation generally includes those born between the early 1980s and the early 2000s. According to population estimates released in April by the U.S. Census Bureau, Millennials have surpassed Baby Boomers as the nation’s largest living generation. Millennials, whom were defined as those ages 18-34 in 2015, number 75.4 million, eclipsing the 74.9 million Baby Boomers (ages 51-69).

“I think we’re the swing voters,” said Teeple, a political science major. “The majority of our generation has not quite been so ingrained into politics. They don’t vote per party.”

Teeple believes that the majority of Millennials are in the political “middle.”

“For our generation, it’s up for grabs,” he said.

Resnicky said the candidates have to realize that her generation cannot be easily swayed by a single statement or viewpoint. She said Millennials have mastered technology to the point that they can extensively research the issues and are exposed to a wide variety of opinions.

The most important issues for Resnicky are human rights, women’s rights, religious freedoms, the military and the job market. She thinks the blog posts will be of interest primarily to an academic audience, at least initially.

“But they could migrate to the general population,” she said. “It would be great if the presidential campaigns read the blogs. I think Millennials have a huge voice. Things we decide in this election could affect not only the rest of U.S. society but also the world.”

The 22-year-old Resnicky grew up in Springfield, Ohio, the daughter of a father who is an engineer and a stay-at-home mother. After graduating from Clark-Shawnee High School, she studied engineering at Purdue University before transferring in 2014 to Wright State.

“With my background in engineering, I’ve always had a really strong passion for most of the STEM fields. But throughout middle school and high school, I did a lot of writing in my free time,” she said. “So my major combines both of my passions. I either want to become a technical writer for an engineering firm or go into media relations or PR.”

Resnicky began following politics in high school, where she took many government classes. At Wright State, she has been in numerous leadership positions and involved in campus politics.

The 27-year-old Teeple grew up in Cincinnati, with many of his relatives serving in the military. After graduating from Reading High School, he enlisted in the Air Force, where he met his future wife.

For eight years, Teeple worked as an intelligence analyst and was deployed to Afghanistan several times. Most recently, he served at the National Air and Space Intelligence Center at Wright-Patterson Air Force Base.

Last year, Teeple enrolled at Wright State and is part of the ROTC program. After graduating, he will be commissioned as an Air Force officer and wants to resume working in intelligence analysis.

The most important issues for Teeple are gay rights, religious freedom, the military and the federal budget.

Raised in a conservative culture, Teeple found himself becoming more liberal after joining the military. He expects his blog posts to be a mix of liberal and conservative ideas that inspire readers to do their own research.