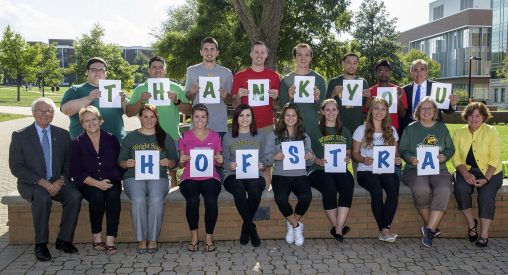 While millions of Americans are watching the Sept. 26 presidential debate on their televisions and digital devices, a handful of Wright State students will have a coveted seat inside the actual debate hall, where they will experience the historic matchup between Republican Donald Trump and Democrat Hillary Clinton in person.

“I’m going to get to experience the debate firsthand so I can actually get the vibe and the full picture, instead of just the parts you see on television,” said Eric Whitt, a sophomore studying electrical engineering.

But before setting off for the whirlwind three-day trip to New York, the lucky Wright State students met for a photo to say thank you to Hofstra University for sharing some of its tickets with Wright State. They are looking forward to being in the middle of all the debate excitement on the Hofstra campus and will even get to meet with Hofstra students and participate in debate-related festivities.

Donna Schlagheck, retired chair of the Department of Political Science who escorted numerous Wright State Model UN teams to New York City, will accompany the group and take them to many New York sites, including the 9/11 Tribute Center. She will be joined by Debbie Kimpton, director of executive office operations, who helped plan the trip. Michael Bridges, chair of Wright State’s Board of Trustees, will travel to New York as well.

The students also expressed sincere thanks to the donors who are covering hotel, food and airline expenses.

“I’m thrilled beyond belief,” said Laura Poole, who is majoring in studio art with a minor in French. “I’ve loved politics since I was a kid in high school. We watched both conventions, and we follow all this very, very closely.”