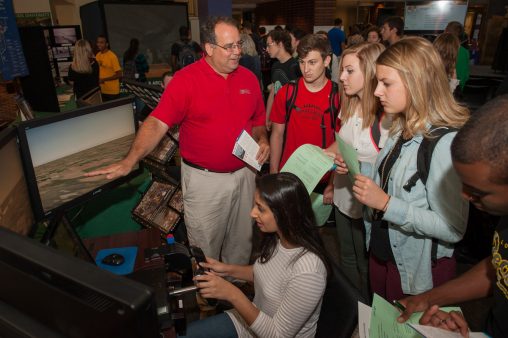 Wright State University will celebrate the innovative spirit of its namesakes and researchers working on campus today with the sixth annual Wright Brothers Day.

Wright Brothers Day will celebrate the 111th anniversary of Wilbur Wright’s 39-minute flight on Huffman Prairie on Oct. 5, 1905. The flight demonstrated that the Wright brothers had advanced their design to the point of a practical airplane.

Aleasiah Howard, a marketing major and president of the marketing association, encouraged students to stop by Wright Brothers Day to learn about the university’s history and the innovative work being done on campus today.

“It’s a fun way to gather Wright State students and the general public to honor the Wright brothers’ legendary venture into flight,” she said. “We as a society have been able to expand upon the hard work and dedication of these aviation pioneers from our very own city of Dayton. As we continue to innovate, this event gives participants the opportunity to venture into this new world of cutting-edge technology.”

Students can meet and take photos with Wright brothers actors from Carillon Historical Park, including Ross Gaby, a history major at Wright State.

Sculimbrene will discuss efforts to restore the historic Wright Company factory, the first such facility in the United States to manufacture airplanes. 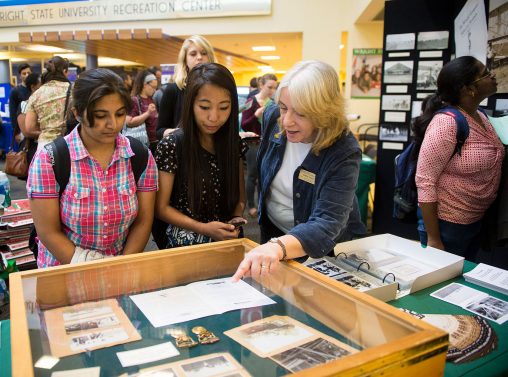 Wright State’s Special Collections and Archives and its head, Dawne Dewey, will display an exhibit on the Wright Brothers factory, the first such facility in the United States to manufacture airplanes.

Wright Brothers Day raises awareness among students about the accomplishments of Wilbur and Orville Wright, who invented the airplane in their Dayton bicycle shop and conducted most of their early test flights on Huffman Prairie.

The event also connects the brothers’ innovative spirit with the same drive found on campus.

To highlight that spirit, Wright Brothers Day will include displays featuring innovative projects from Wright State researchers and local organizations.

These include Raj Soin College of Business‘ Data Analytics and Visualization Environment (DAVE) lab, which researches Big Data; a robot created by the Wright State Research Institute; an analysis of the use of emojis on Twitter by the university’s Kno.e.sis Center; a genomics study by researchers at the Boonshoft School of Medicine; Galatune, a fantasy card game created by M.B.A. student Adam Wik; and artificial hands created on a 3-D printer by Ashley Hall, an assistant professor of English and communication.

Wright State’s Special Collections and Archives, which houses one of the most complete collections of Wright material in the world, will have an exhibit on the Wright Company factory.

Students can also fly like Wilbur and Orville by trying out a Wright Flyer simulator, supplied by the National Park Service.

The event will offer a selfie station, raffle and trivia contest. Food will also be available.