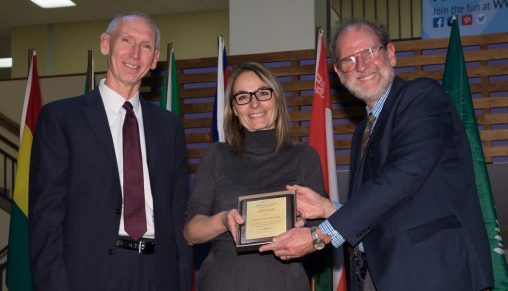 Pascale Abadie, an assistant professor of French who is a driving force of Wright State’s France Ambassador Program, was honored with the university’s 2016 International Education Award.

A native of Paris and a U.S. citizen, Abadie has been an integral part of the France Ambassador Program to Paris. About 20 students participate in the summer program each year.

“Wright State students, many of whom are leaving the U.S.A. for the first time, come away from these programs with expanded global awareness, a new-found ability to accept another cultural experience as valid and the ability to release stereotyped attitudes toward France and the French people,” said Marie Hertzler, associate professor of French and chair of the Department of Modern Languages.

Abadie and her husband, Thierry Abadie, in 2014 endowed the Joëlle Giacinti Scholarship Fund, which supports students who participate in the ambassador program. About 25 students have benefited from the scholarship.

“Pascale takes every opportunity to introduce the Francophone cultures of Africa and Europe in her classes,” said Hertzler. “She regularly invites international students at Wright State as well as internationals in the community at large to talk and eat with students in French Conversation classes as they share cultural, political and personal experiences.”

Abadie obtained her bachelor’s degree in French and business, a master’s degree in education from Wright State and her Ph.D. in Francophone literature and culture from the University of Cincinnati.