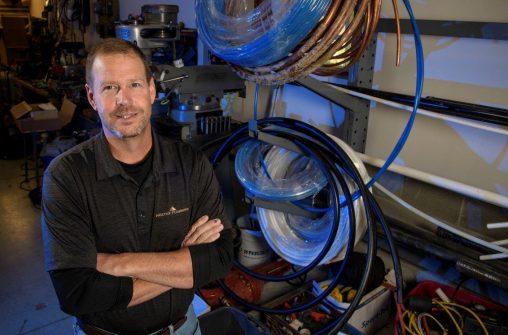 During the day, he was unclogging drains, repairing pipes and installing plumbing systems. At night, he was reading Chaucer and Joyce during classes at Wright State University.

Today, Chris Heeter has his English degree and a fast-growing plumbing business. It’s a most unlikely pairing, but one that works well.

“Would I tell every plumber to go get an English degree? No. I just fell into that,” Heeter said. “But it really helps to take a writing course, a communications course, a computer course.”

Heeter, 45, grew up in North Dayton. His father worked at NCR and was transferred to Westerville, Ohio, where Heeter spent his adolescence and graduated from Westerville North High School.

Heeter worked ever since he could carry a newspaper. As a boy he delivered the Dayton Daily News, mowed lawns and lifeguarded. When he returned to Dayton after graduating from high school, he got a job at a law firm as a runner, delivering legal documents to the courts. He later worked at the firm as a paralegal and had his eye on becoming an attorney.

In 1990, Heeter enrolled at Wright State, taking a class or two at night while he continued to work at the law firm.

“I just decided to major in English because it was easy for me and it didn’t really matter, as far as pre-law, what you take,” he said. “I had always been strong in comprehension and reading.”

However, he came to learn that attorneys often have to deal in life’s depressing experiences such as divorce, malpractice and death. So he re-evaluated and in 1998 took a job in his uncle’s plumbing shop.

“I jumped ship. I went from a very well-paying job to a $6.50-an-hour plumbing job,” he said. “It was like the nuclear option. I’d been in a suit and tie; I’d been in an office. So I put tools in my hands and started a trade. It felt great.”

While learning the plumbing business, Heeter took a break from college. He returned to Wright State in 2000 and graduated in 2004, thanks to the urging and support of his wife, Diane.

“She sacrificed much to allow me to return,” he said.

Heeter said he enrolled at Wright State because it was a good value and offered him a tool to advance his career. It later became more of a community for him than just a university.

“All those electives you take, they really do help you in life,” he said. “Here I am as a plumber that knows Microsoft Word and knows Excel and can do the analytical thinking that college trains you in. So you can apply that.”

Heeter said his reading, comprehension and study skills enabled him to master plumbing and other training manuals that enabled him to quickly become certified in various trades.

“Where others might struggle, it was very easy for me to pick up,” he said. “There are a lot of licenses to get in the trades. People don’t understand that.”

Heeter decided to start his own plumbing business in 2003.

Heeter said his legal background combined with his writing skills enable him to write detailed estimates for jobs. Customers know exactly what they’re paying for, minimizing any potential for misunderstanding or disputes.

Heeter is so busy building his business that he hasn’t gone on vacation for a couple years and recently worked 57 days straight. Yet the company has a relaxed, family feel.

Having the run of the North Dayton headquarters are four handsome dogs — a Black Lab, Goldendoodle, Boxer and Old English Sheepdog that go by the names of Grover, Maxi, Frazier and Sadie. They frolic among the tools, coils of copper piping and boxes of plumbing equipment that populate the warehouse.

When he is not reading technical journals, Heeter likes to take an Encyclopedia Britannica off the shelf at home, randomly turn to a page and begin reading. He believes people need to read more in order to understand society.

“Everything is not an app on a computer. Everything is not a 10-second blog,” he said. “You can read Shakespeare and say, ‘That’s outlandish and these stories are crazy.’ But if you overlay that with what’s going on in society now, you see it’s all been done before. It makes sense.”

Heeter said his life was changed when he read Ayn Rand’s novel “Atlas Shrugged,” which depicts a society in which aggressive new regulations cause vital industries to collapse. He said the book taught him the importance of personal responsibility and being the best you can be.

“That hit me like a ton of bricks,” he said. “Other than the Bible, it’s probably the most influential book I’ve ever read.”