“This is the right time to be at Wright State,” she said. “That is because it is an institution that has built up incredible momentum in the past decade and is just poised to move to that next level. That’s where I’ve been at my last three institutions, and I would like to be working together with the people at Wright State in order to do that here.” 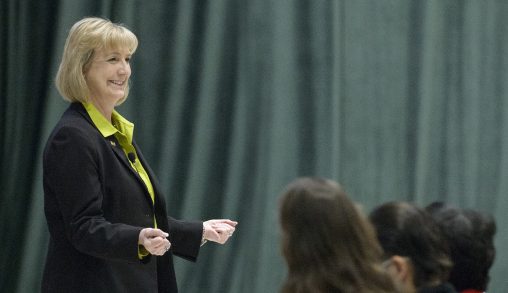 Cheryl Schrader, chancellor of Missouri University of Science and Technology, is one of three finalists for the Wright State president’s job. (Photos by Will Jones)

Schrader said her hallmarks are innovation, collaborative research and technology transfer, which are key to moving a university forward. And she said Wright State is well-positioned to expand its connections with nearby science, technology and agriculture-related industries.

“In some sense, I felt the fit was right and the future is bright,” she said.

Schrader joined Missouri S&T in 2012. Founded in 1870 as one of the first technological institutions west of the Mississippi River, Missouri S&T is a public space grant university located in Rolla, Missouri, and is part of the University of Missouri System. Most of its nearly 9,000 students study engineering, business, sciences and mathematics.

Schrader said Wright State is not alone in facing budget challenges. For example, Missouri S&T is looking at a 13 percent budget cut because of a decline in state support.

She said universities must develop long-term fiscal sustainability models and try to diversify revenue streams. Part of that is working as a team and listening to all voices in the campus and outside community. She said transparency is important. She has held community budget forums at Missouri S&T and accepted feedback from the bottom up.

“You want to be as open as possible about budgets,” she said.

Schrader said she has been careful to protect the academic units in the budget process. And she said she understands the stresses on professors’ time because she’s lived it.

“At my institution, I say the most precious resource is faculty time,” she said.

Schrader said she has no experience in dealing with a faculty union. But she said relationships are built on trust and respect and that is how she approaches any bargaining agreement.

Schrader also said staff is crucial to the success of a university and is the face of the institution, interacting with both students and the outside community.

“I have always worked hard to make sure to recognize and elevate the contributions of staff,” she said. “…Every one of us brings something of value.”

Schrader said the number of administrative jobs have grown at many schools because of the increasing importance of compliance and student services. She also said advancement jobs are important because those efforts return $5 for every $1 spent.

“The reason I’m in administration is that I like to help people be successful,” she said.

Schrader said she supports honors programs and international education, with Missouri S&T committing to doubling its study-abroad program by 2020. She said she has created more than 30 graduate programs at various institutions and has a high regard for liberal arts, which develops communication and critical-thinking skills. 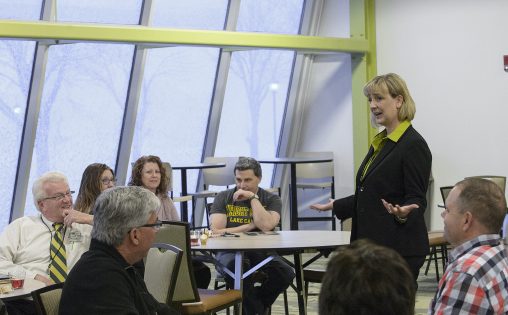 Cheryl Schrader met with students, faculty, staff, administrators and community leaders in five forums at the Dayton and Lake campuses.

Before coming to Missouri S&T, she served as associate vice president for strategic research initiatives at Boise State University and dean of the College of Engineering at Boise State. She also held numerous administrative positions at The University of Texas at San Antonio, including associate dean for graduate studies and research for the College of Engineering and the College of Sciences, university graduate recruitment coordinator and associate director of the Center for Advanced Propulsion Studies. She also interned at the McDonnell Douglas Astronautics Company in Huntington Beach, California.

As a systems engineer, Schrader said she would bring a different perspective to the Wright State job.

Schrader said Wright State has a great foundation of diversity and inclusion, which are linchpins to innovation and things she has focused on her entire life. For example she helped increase the population of minority engineering students at Boise State by 45 percent. In 2005, President George W. Bush gave Schrader the Presidential Medal of Excellence in Science, Mathematics and Engineering Mentoring. She said one reason she received the award was because she brought more women and students of color into those fields.

“To me, a university is an intellectual, social and cultural hub of a community,” she said.

Schrader referred to fundraising as “friendraising.” She helped secure a $13 million gift when she was at Boise State, largest in the university’s history.

Schrader said a university president should help maintain a safe, healthy and inclusive campus environment and develop career-ready graduates. Physical spaces for students are an important part of the student experience, she said, adding that students are more engaged and academically successful when they live on campus. She also detailed her success in increasing student retention.

“Students are the reason we are here,” she said. “…Affordability and accessibility are priorities for me.”

At Missouri S&T, Schrader helped turn the library into a “learning commons” and helped create a student success center, with support services provided by counselors, administrators and faculty. Dining options were also expanded.

Schrader said she has forged strong collaborations with the military, adding that Missouri S&T recently opened a resource center for military veterans.

She describes herself and her family as “avid college sports fans.” (While a student at Notre Dame, she participated in the movie “Rudy,” which was filmed on campus.)

Schrader has invested in athletics and sports facilities at Missouri S&T. She said athletics helps build community and is a recruiting tool.

“We attract students through athletics that we wouldn’t get otherwise,” she said.

Schrader writes a monthly newsletter for the campus community and produces direct communiques for students on especially important matters.

“I’m on Twitter, and I find that’s a great connection,” she added.

Asked how she would handle a controversial speaker coming to campus, Schrader said the campus needs to be an environment where it is OK to disagree.

Schrader said Wright State is more comprehensive than Missouri S&T, which is largely STEM-focused. She said she would relish overseeing the wide variety of Wright State’s offerings, such as its nationally recognized programs in the performing arts and motion pictures.

“The most important goal would be to elevate the stature of this institution so that this institution is recognized for the quality of the graduates that it produces,” said Schrader. “…There are gems here, and the ability to elevate and raise that visibility can really help us in so many ways.”

More information about Schrader — including her CV, letter of interest and links to videos of her forums — is available on the university’s presidential search website.