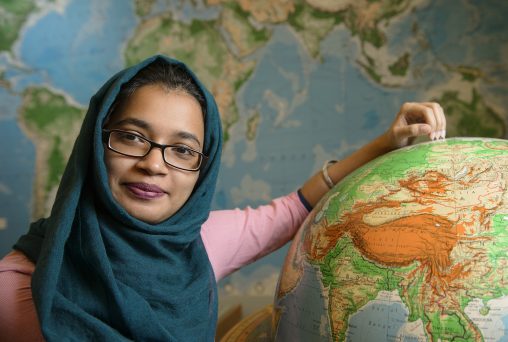 Ummey Tabassum, a student in Wright State’s Master of Public Administration and International Comparative Politics programs, attended a prestigious Harvard conference on issues in the Asia-Pacific region. (Photo by Will Jones)

Ummey Tabassum, a Wright State University graduate student from the South Asian nation of Bangladesh, took part in a prestigious conference at Harvard University convened for future leaders to discuss issues in the Asia-Pacific region.

The 2017 Harvard Project for Asian and International Relations was held Feb. 17-20.

The project is an internationally recognized student-run organization at Harvard that hosts forums to discuss the most important economic, political and social issues in the Asia-Pacific region.

Tabassum was told that this year’s application process to attend the conference was particularly competitive, but that her application impressed organizers.

“HPAIR believes that finding common ground in Asian-Pacific issues is a dynamic and innovative process, which integrates ideas and actions from across Asia and indeed, the whole world,” Larry Zhang, executive director, said in a letter to Tabassum. “It is only through the active participation of highly qualified delegates like you that this understanding and process can be realized.”

Tabassum participated in the Humanitarian Affairs track, an area in which she was especially interested. There were three sessions:

One of the Humanitarian Affairs panels featured professors and fellows from Harvard and MIT who discussed migration, displacement and refugee crises. Part of the discussion was about the definition of refugees and how they are differentiated — whether they are just migrating or if they are fleeing a conflict.

Tabassum said the session was highly interactive, offered various perspectives and that she learned a lot.

“It was a great opportunity to explore international relations in terms of Asia, but it was also good for my professional development,” she said.

Tabassum studied politics, philosophy and economics at Asian University for Women in Chittagong, Bangladesh, a school with more than 600 students from 15 countries across Asia and the Middle East.

While working on her bachelor’s degree, she became interested in developmental studies and international relations. She would eventually like to work as an administrator for an international nonprofit development organization.

“If we don’t work in development, who else will?” she said.

Tabassum enrolled at Wright State in 2014 after winning a scholarship and a graduate assistantship. She is working on her master’s degree in international comparative politics and public administration.

Tabassum plans to share her Harvard experience with fellow Wright State students. She is currently applying for internships and hopes to work on projects in her native Bangladesh after graduation.