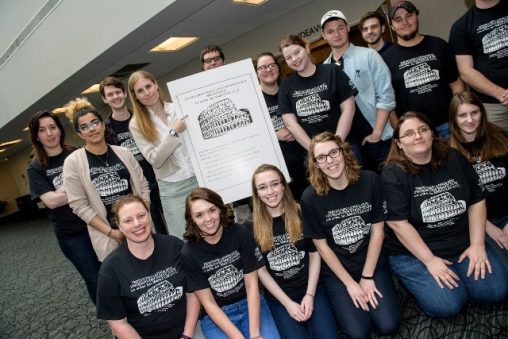 Gladiators in the Colosseum of Ancient Rome had their weapons inspected before battles to ensure they were sufficiently sharp, would fight with their chests exposed except for shields and would raise a finger to the crowd to ask for mercy.

But it was rarely a fight to the death. The goal was to see highly skilled contests, and gladiators would typically fight several times a year.

These historical nuggets were among the highlights of the third annual Latin Day hosted by Wright State University’s Department of Classics on April 3, which drew about 90 students from Latin programs at Butler, Carroll and Fairmont high schools.

Rebecca Edwards, associate professor of classics and head of the university’s Latin Licensure Program, said Latin Day is designed to support the high school programs and let the students know that Wright State is dedicated to helping them continue their Latin education and to producing Latin teachers.

“It’s a mutual benefit,” said Edwards. “We get to entertain these high school students and hopefully some of them will decide to come here and study Latin. It also helps our students. We have several students right now who are training to be high school Latin teachers.”

Wright State is the only university in the region with a Classical Languages department that teaches Greek and Latin. Its Latin-teaching licensure program is a collaboration between the College of Liberal Arts and the College of Education and Human Services.

Edwards said Latin builds critical-thinking skills, strengthens writing and is a good option for students who may be challenged by the conversational part of learning foreign languages.

The Latin Day sessions included lessons in Ancient Greek and a discussion of the “Ars Amatoria,” a series of books by the ancient Roman poet Ovid that teaches gentlemanly male and female relationship skills and techniques. And, of course, a session on the gladiators and chariot races of ancient Rome.