The “chink, chink, chink” of steel trowels striking and scraping stone is the soundtrack of history being revealed at George Rogers Clark Park just outside of Springfield, Ohio.

Wright State University anthropology students are unearthing the limestone foundation of a structure occupied by white settlers on what was the razor’s edge of the frontier — a true danger zone being fought over by settlers and Native Americans in the late 1700s and early 1800s.

“We realized very quickly that this was a really substantial foundation,” said Lance Greene, assistant professor of anthropology. “As we uncovered more and more, there was sort of growing excitement about what we were discovering here.”

It’s all part of a Field School in Archaeology offered in an anthropology course in the College of Liberal Arts. This year’s class included 13 students and three student supervisors.

After the Revolutionary War, white settlers began moving into the area in the 1790s, building farmsteads. The site is near the Mad River in what is now southwestern Clark County, just northeast of Wright State. 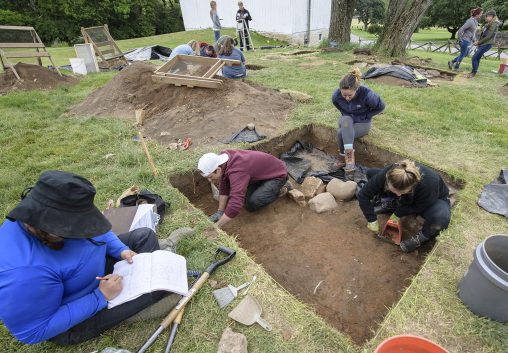 Students in Wright State’s Field School in Archaeology investigated a limestone foundation of a structure occupied by frontier settlers outside of Springfield, Ohio. (Video by Kris Sproles/Photos by Erin Pence)

“The fight for the Northwest Territory happened right here. This was the heart of it,” said Greene. “But equally as important, after 1780 this was sort of the frontier for a long time. There was a lot of danger. To be able to construct a place like this and live here and survive and be successful sort of represents that move westward by white settlers.”

Ground-penetrating radar was used to locate the buried stone foundation, which appears to be that of a house about 18 feet long and 12 feet wide.

In an excavation that began in late May, the foundation began to emerge in several of five angular plots cut into the landscape. The students used skim shovels, metal trowels, brushes and even spoons to remove the soil, which was transferred to wood-framed sifters and hand-shaken through a screen, leaving artifacts and fragments behind.

In one plot, a tumble of stones veined with the roots of a locust tree could perhaps be a fallen chimney. The recovery of animal bones and pieces of ceramics, dishware and glassware suggests the structure may have been used as a kitchen.

Tracey Steele, associate professor and chair of the Department of Sociology and Anthropology, was at the site to observe the excavation and noted the enthusiasm of the students and their breadth of knowledge.

“I don’t think there is anything that matches the personal experience of getting your hands dirty,” she said. “They get so excited.”

Steele said anthropology gives students an understanding of the interaction of people, the environment and history.

“When they go out, they see the world in a very, very unique multidimensional way,” she said. “I don’t think most disciplines really train people to wear so many conceptual hats.”

The students come from a variety of majors, including anthropology, biology, history and geology. 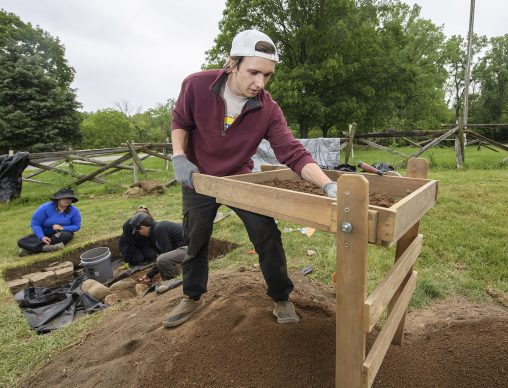 Jordan Buffington, a biological sciences major from Beavercreek, said taking part in the dig is exciting and has taught her things she couldn’t have learned in a textbook.

“I found a prehistoric piece of pottery. I thought it was a rock and then it was not a rock,” she said. “It made Dr. Greene very excited. And I started jumping up and down like I’d won a car on ‘The Price Is Right.’ There is nothing that compares to that.”

Buffington’s career goal is to go to medical school and become a physician. She said the excavation has taught her how to work with people under sometimes tough conditions and how to handle pressure, lessons she can use in the medical field.

Cullen Dunajski, an anthropology major from Springboro, wants to become a physician’s assistant. He said anthropology has given him a greater understanding of the human aspect of medicine and that the excavation has enabled him to step outside of his comfort zone.

“I’ve done study-abroad programs, but this is a whole new experience you can take away a lot from,” he said.

At Wright State, Greene created the Field School to investigate the archaeology and history of Shawnee settlements in Ohio.

Piqua, also known as Peckuwe or Picawey, was a Shawnee village of about 3,000 established in the mid-1700s near where the students are digging. The village and British-style stockade were attacked by a Kentucky militia of 1,100 led by George Rogers Clark on Aug. 8, 1780.

The militia reported killing about 40 Shawnee, burning all of the houses to the ground and destroying 800 acres of corn. The heart of the battlefield is a grassy, 30-acre meadow.

Greene said perhaps the most interesting artifact that was uncovered is a lockspring, which was used to fire muzzle-loading rifles. If it was made in the 1780s, it could be a clue to the exact location of Fort Shawnee.

The main goal of the Field School is to identify parts of the Shawnee village and the battlefield, but the excavators are also interested in the later white settlements. 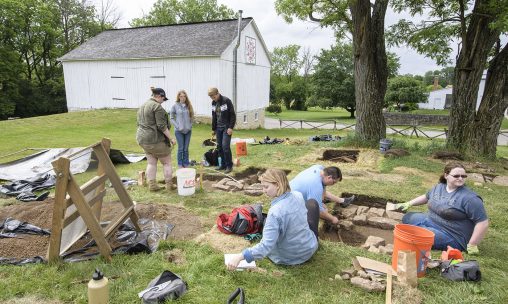 The Field School teaches students how to excavate, identify artifacts and record information.

The students excavated about 10 percent of the foundation in two weeks during their six-week dig. Next year’s Field School will return to the site to get a better idea of exactly how old the structure is and what activities occurred there.

For the students interested in archaeology, the Field School teaches them how to excavate, identify artifacts and record information. They also learn about soils and geology.

“If you are interested in a job in archaeology, this is really critical,” Greene said.

Alyssa Stark, an anthropology major from Dayton, wants to get an advanced degree in public history and pursue a career in museum studies and education.

“You can sit in a museum collection all day and look at objects and think about the culture where they came from,” she said. “When you actually see them in the ground and the process of digging them up and thinking about what it could mean, it’s a much different process. I think that will be something that I take with me.”