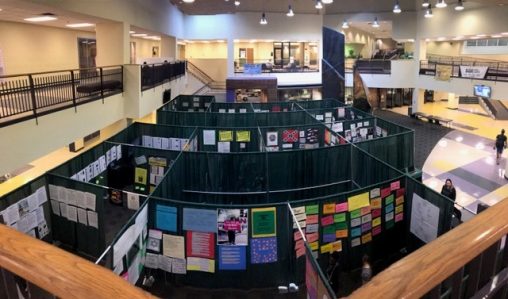 The Tunnel of Oppression is an eye-opening experience designed to help first-year students at Wright State University appreciate diversity and fight discrimination.

The Tunnel of Oppression, an eye-opening experience designed to help first-year students at Wright State University appreciate diversity and fight discrimination, has been honored by the Southwestern Ohio Council for Higher Education (SOCHE).

SOCHE awarded its 2017 Diversity and Inclusion Award to the Wright State team of Nycia Lattimore, assistant director of the Bolinga Black Cultural Resources Center; Catherine Queener, director of University College’s First-Year Programs; and Kim Stephens, coordinator of First-Year Programs, for their work on the tunnel, which has operated at the university for 17 years. The official award will be presented Nov. 10 at the Dayton Art Institute.

Trained tunnel facilitators help students process their experience with post-tunnel discussions designed to get the students to open up about their feelings.

“Many students remember their fall semester tunnel ‘aha’ moments as a critically important part of their first year at WSU,” Kristin Sobolik, former dean of the College of Liberal Arts wrote in her nominating letter to SOCHE. “The final room of the tunnel, ‘How to be an Ally,’ helps students begin to envision themselves as advocates, active bystanders or allies.”

The 2016 tunnel served hundreds of first-year students and many other members of the campus community.

Students take surveys before and after participating in the tunnel. Results indicate that attitudes and understanding regarding oppression, discrimination and diversity change significantly after participation.

The tunnel project is organized by a collaboration of individuals from Wright State’s Bolinga Black Cultural Resources Center and First-Year Programs. The project receives strong support from diverse units and people across campus, who share responsibility for updating and upgrading educational materials used in the tunnel.

SOCHE is a regional consortium of 22 colleges, universities, and businesses advancing higher education through academic collaboration, corporate and community partnerships.