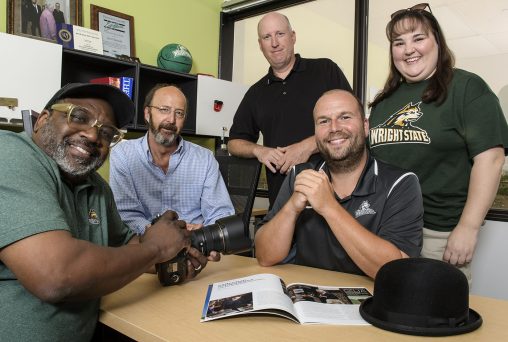 For the Best Videographer prize, Sproles submitted a compilation of three video stories he produced: “Reel happiness,” “On a mission” and “Rare earth.”

Sproles’ “Go Baby Go!” video story highlighted a collaboration between Ohio’s STEM Ability Alliance at Wright State and the Clinton County Board of Developmental Disabilities to build a motorized vehicle to help a 2-year-old get around on his own.

“If you have read a story or watched a video or admired a photo on a Wright State University web page, then it’s very likely you’re aware of this group’s stellar work,” said Seth Bauguess, director of communications. “Our colleagues are so deserving of this state-wide recognition, and for the second year in a row too.”

Ohio’s Best Journalism Contest was sponsored by the Cincinnati, Cleveland and Columbus Society of Professional Journalists chapters. The contest included entries from major newspapers, broadcasters, radio stations and colleges from across the state.

More stories by staff members in the offices of Communications and Marketing, the Boonshoft School of Medicine and University Advancement can be found in the Wright State Newsroom.