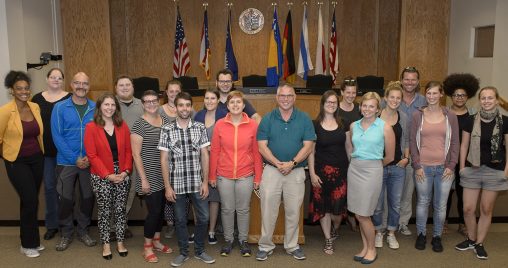 Serving food to the homeless and others in need, interacting with the mentally ill and getting a look at Dayton’s nationally recognized immigrant-welcoming program. These activities were all part of a special Wright State University course that included a group of social work students from Switzerland.

This year, the course was taught at Wright State and included 12 students from Zurich University of Applied Sciences School of Social Work and six students from Wright State. The course, which is taught by Wright State instructor Doug Keown and two professors from the Zurich university, combines classroom discussions and lectures with visits to local social service agencies.

“It gives us an opportunity to compare what we do here and how we do things with how they do things over in Switzerland,” said Keown. “It can give us some ideas about what we’re doing well and not doing so well, and maybe there is something we could try to do better here.”

The course analyzes the social welfare systems in the United States and Switzerland, comparing each country’s approach to child welfare, older adults, poverty and criminal justice.

“What they do as social workers is very different from what we do,” said Keown. “We do a lot more in the trenches, on the front lines.”

The objective of the course is to help students understand social policies in their own country in comparison to those of another country.

“We talk about the differences in our service delivery. It can range from how we view poverty, how we fund social service programs for poverty or substance abuse,” said Sarah Twill, professor and chair of the Department of Social Work. “Then we visit social service agencies.”

The students spent July 4 serving meals to 200 customers of the House of Bread, a nonprofit that provides free hot lunches every day of the year to those in need. Twill said the Swiss students had trouble understanding why people are homeless and don’t have food, wondering why there isn’t a safety net.

“I find it really interesting to see the differences between Switzerland and the U.S.,” said Sandra Teo, a social work student from Zurich who may study at Wright State this winter. “But there are a lot of similarities.” 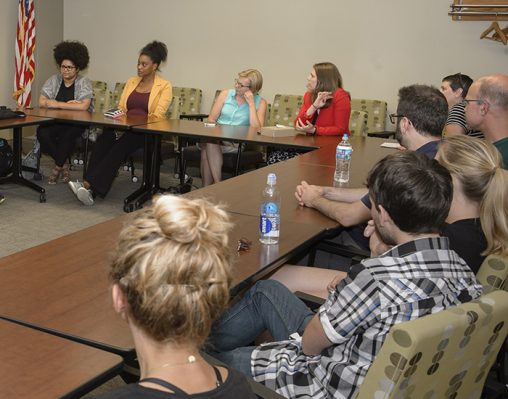 Twill said the Swiss students were impressed with U.S. special education programs and how disability friendly the Wright State campus is.

“I think a lot of the programs in Switzerland are better in some ways, but I also think our programs here in the U.S. and our agencies have a lot to offer to the Swiss students as well,” she said, adding that U.S. agencies receive more private donations because they cannot always rely on government support.

On July 10, the students visited the Dayton VA Medical Center and the Miracle Clubhouse, a Goodwill/Easter Seals day program for people with mental illness. They also stopped at Dayton’s City Hall to talk about the role of social workers in city government.

They met with Laura Pippinger, social worker and aide to the Dayton City Commission; and Melissa Bertolo, program coordinator for Welcome Dayton, which promotes immigrant integration into the region by encouraging business and economic development; providing access to education, government, health and social services; ensuring equity in the justice system; and promoting an appreciation of arts and culture.

Previously, the students had visited the Ronald McDonald House Charities of Dayton, the CARE House, an advocacy center for children and families affected by abuse; and a behavioral health and drug treatment center.

Keown said the exchange program has provided food for thought about what could be changed in the United States in dealing with substance abuse.

Switzerland has focused on reducing the harm of drug use among those who inject drugs, creating supervised injection sites and offering substance analysis services and access to opiate substitution therapy, mainly through methadone and even medical heroin. The innovative policy of providing drug addicts with free methadone and clean needles has greatly reduced deaths and the crime rate.