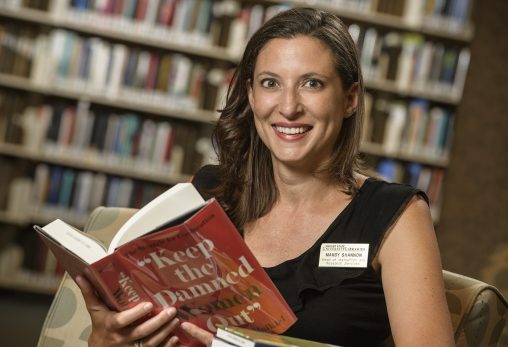 Mandy Shannon, head of instruction and research services at University Libraries, helps organize the Loretta M. Schaechterle Book Fund, which provides books and multimedia materials that promote an understanding of the lives of women in the United States. (Photo by Chris Snyder)

The collection — 115 books and growing — were all purchased from a special fund established in the memory of Loretta M. Schaechterle, a life-long learner with a love for reading, education and adventure. It is one of 11 such Book Support Funds designed to honor the interests of their namesakes.

“For the library, it gives us a chance to specifically curate materials that might otherwise have been missed because they are not necessarily part of a subject area’s collection,” said Mandy Shannon, head of instruction and research services at University Libraries. “For the people who set up the funds, I think there’s a real advantage to knowing that their personal interests can continue to be preserved with current, up-to-date research in publications that will be supported in the library. And it’s a nice way to honor the legacy of somebody who had those interests.”

The funds enable their namesakes to color, influence and enrich knowledge that is dear to their hearts and to put it at the fingertips of students and researchers. There are currently 10 other book funds that cover a wide range of interests, including artists, history, Cold War technology, English Romanticism, Irish studies, women’s studies, British contemporary fiction, poetry and academic freedom.

The funds are set up through the Wright State Foundation and can be contributed to by anyone.

The Schaechterle fund was established in 2010 by Schaechterle’s daughter, Carol Loranger, distinguished professor of service and chair of the Department of English Language and Literatures. The mission of the fund is to provide an understanding of the lives of women in the United States. It features books that include women in the media, on the frontier, in World War II and the intersection of gender and race.

Most of the collection focuses on women of the 20th century, like its namesake.

“My mother was a very typical woman of the World War II generation,” said Loranger.

Schaechterle left home after high school and moved to Denver looking for opportunity. During the war years, she was an executive secretary at Fitzsimmons Army Hospital, sharing an apartment with a girlfriend and getting around the city on streetcars and by bicycle, very independent. She met her future husband when he fixed her flat tire at his father’s filling station.

“After the war and marriage as the children came, Schaechterle focused on her family, like so many of her contemporaries,” said Loranger. “My father was the character, the one everyone remembers, but Mom kept the wheels on the bus. Women just getting done what needs doing. That’s a part of our history we tend to forget.”

A sampling of titles purchased with the fund include: “Frontier Grit: The Unlikely True Stories of Daring Pioneer Women”; “Keep the Damned Women Out: The Struggle for Coeducation”; “Soldier, Sister, Spy, Scout: Women Soldiers and Patriots on the Western Frontier”; “The Queen of Heartbreak Trail: The Life and Times of Harriet Smith Pullen, Pioneering Woman”; and “Unprotected Labor: Household Workers, Politics and Middle-Class Reform in New York.”

The target audience is anyone who is interested in learning more about 20th century history and seeking a perspective that perhaps had not been covered in other texts that they read. The books also provide a rich resource for researchers.

Shannon starts with publisher catalogs and then browses Amazon for books about to be published. She then checks the websites of academic publishers, particularly those that focus on gender issues.

“With a book fund like this, it’s important to make sure the collection meets the interests of the person who established it,” she said. “There is an extra weight in selecting books when they are to honor the memory of a loved one, and I enjoy the process of trying to find the newest scholarship that promotes this collection.”

When her mother died in 1998, Loranger struggled to imagine a fitting memorial for her.

“We moved a lot when I was young,” Loranger recalled, “but Mom made sure we got library cards and got us to the library regularly. Even when finances were tight, she would find the way to buy us books from time to time. As a result, all of us are voracious readers.”

In 2009, Loranger got the idea for the book fund after learning about the University Libraries’ Harden Fund for Irish Studies.

“Clearly the most appropriate way to honor Mom was to emulate her by providing plenty of library books for others,” Loranger said. “The topic was a natural — all these women making the United States what it is.”

The books are dispersed through Dunbar Library according to the Library of Congress classification code. But it is noted — both in the card catalog and on the books themselves — that the books were purchase by a specific fund.

“There are many different ways to honor someone’s memory, but the book funds honor the memory while also perpetuating the interests of the funds’ namesakes,” said Shannon.

“So there are ripple effects that promote their interests and the knowledge that’s important to them for generations to come.”