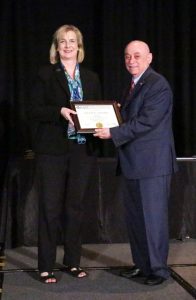 Wright State President Cheryl B. Schrader was honored as a Fellow by the American Society for Engineering Education. Presenting the certificate was ASEE President Louis Martin-Vega.

Wright State University President Cheryl B. Schrader was named a Fellow by the American Society for Engineering Education for her outstanding contributions to the field, a rare honor conferred on only a small fraction of the society’s members.
Schrader received the honor June 28 during the society’s annual conference in Columbus.

“Because of her enlightened and creative leadership, Cheryl Schrader has guided major developments in engineering education and has earned advancement to Fellow membership in the ASEE,” professional colleague Edwin C. Jones Jr. wrote in his letter nominating Schrader.

Fellow Grade is one of unusual professional distinction and conferred by the society’s board of directors upon an ASEE member with outstanding and extraordinary qualifications, experience in engineering or engineering technology education or allied field, and contributions to the ASEE. Bylaws limit the number of members who can be advanced to Fellow Grade in any one year to one-tenth of 1 percent of the ASEE individual membership.

In her first year, Schrader helped draft a STEM initiative and gain support from all 13 four-year institutions, efforts that resulted in the Missouri governor and legislature supporting investment in STEM.

President George W. Bush presented Schrader with the Presidential Award for Excellence in Science, Mathematics and Engineering Mentoring, lauding her accomplishments in encouraging and supporting underrepresented groups in engineering.

Schrader has an extensive record of systems and control research, has authored more than 100 publications with five Best Paper awards and has secured more than $11 million in grant funding.