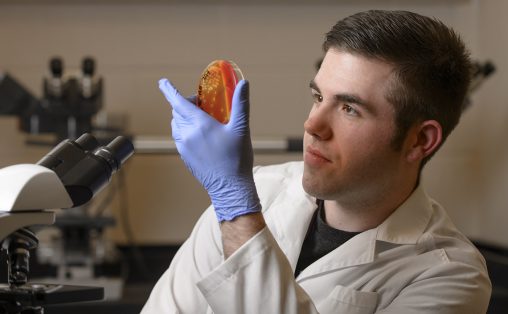 It’s a pressure-packed job that can mean the difference between life and death — testing for diseases caused by bacteria in order to determine the proper treatment. But Brandon Baum loves the challenge and detective work of it.

“This job enables me to help people while doing the laboratory work that I love and using my brain to solve the puzzles,” Baum said. “Every single thing I look at is always new, and it’s always challenging me to use my skills to be better.”

Baum’s skills are already pretty good. He graduated from Wright State in April with a cumulative 3.85 GPA and just won a prestigious National Student Honor Award from the American Society for Clinical Pathology, the world’s largest professional membership organization for pathologists and laboratory professionals.

“It’s an honor,” said Baum. “To be one of the people who were nominated for this award in the U.S. feels really good.”

Baum grew up in Piqua and graduated 11th in his class of 400 at Piqua High School in 2010. He earned his associate degree at Edison Community College and then enrolled at Wright State in 2013, majoring in biological sciences.

So after receiving his biology degree, Baum took an extra year to study microbiology, chemistry and hematology as they relate to the care of patients and in 2017 earned his certificate in clinical laboratory science.

“It was very tough. But I always thrive in challenging situations,” he said. 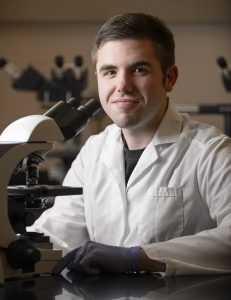 After receiving his biology degree, Brandon Baum took an extra year to study microbiology, chemistry and hematology and earned his certificate in clinical laboratory science.

Wright State’s Clinical Laboratory Sciences program was launched in the 1980s after local hospitals closed their training programs because of an oversupply of medical technicians. And when the University of Dayton terminated its program, Wright State became the lone producer of clinical laboratory scientists in the region.

There is currently a great demand for clinical laboratory scientists in the area because many are retiring or on the verge of retirement. And a shortage is being predicted for several more years.

The Wright State program accepts 14 students a year from a field of twice as many applicants, some of whom hail from other states and countries. Students either obtain a bachelor’s degree in clinical laboratory science or a certificate they can couple with a different undergraduate degree.

The students study hematology, clinical chemistry, microbiology and immunohematology. They go through a summer session of lectures and labs and then work at local hospitals four days a week.

Baum received a full-ride scholarship for the laboratory science program from CompuNet as long as he agreed to work at the company for at least two years after graduation.

“As of now, I think I am where I want to be,” he said. “I honestly wanted to work there anyway. That was my goal.”